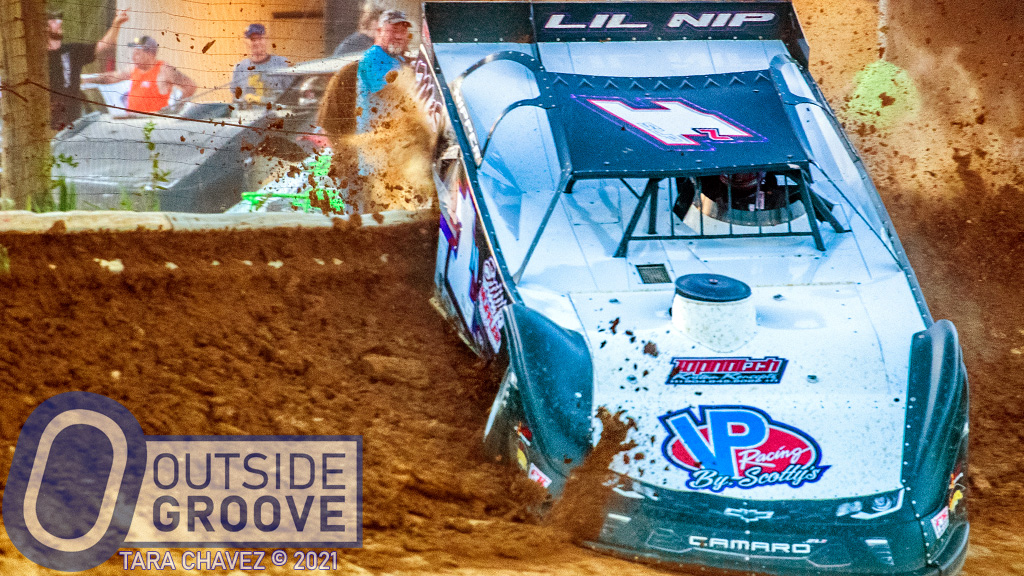 This summer, Jordy Nipper wanted to hit the road and tour several new tracks by following the Schaeffer’s Oil Southern Nationals Series. Instead, he started by hitting the wall with this qualifying lap at Beckley Motorsports Park in West Virginia.

“Got in there a little hot, didn’t get it steered, and got up on the wall,” said Nipper, 33, of Gray, Georgia. “We were quickest in hot laps, and I was trying to duplicate that.”

The accomplished racer typically races 604 late models. Nipper prefers to race at Peach State tracks near his home, such as Cochran Motor Speedway, Needmore Speedway, Senoia Raceway, and Swainsboro Raceway. However, he felt now was the right time in his life to try traveling with the Schaeffer’s Oil Southern Nationals Series.

“I’m financially able enough [to race the series] — my business is good,” Nipper, who owns Scotty’s Muffler Brake & CV Joints in Macon, Georgia, said. “My wife, Sarah, and kids [four-year-old, Landon, and three-year-old, Peyton] told me to go do it, and it will probably be the only time I can do it. The older [my children] get, it will be much harder [to find the time to travel to race].”

At Beckley, Nipper surprisingly time-trialed sixth out of 24 cars.

“The second lap was better,” said Nipper, who was dubbed “Lil Nip” by his father, Scotty Nipper, who had also raced. “The first lap was when I hit [the wall]. In the car, [the hit] didn’t feel that bad. It just hurt the quarter panel — the decking was fine.”

Nipper fell back to just outside a qualifying spot in the heat races. He rallied to finish second in the B-main, which set him to start 18th in the feature. Then, on the second lap, he broke a driveshaft. Only one race into the schedule, Nipper has already learned a valuable lesson.

“Quit tearing up stuff,” Nipper said of his first teaching of competing on a circuit that races nearly every night within the span of two weeks. “You don’t have to work on it as much if you don’t tear it up.”

Thanks to two consecutive rainouts and a scheduled night off, Nipper had plenty of time to make repairs. He’ll attempt his second feature race with the series tonight at I-75 Raceway in Sweetwater, Tennessee. Jordy Nipper approaches the Schaeffer’s Oil Southern Nationals Series with realistic expectations.

“I want to win and I feel like I have the equipment to win, but I want to be solid — top fives and finish most nights in the top 10,” said Nipper. “Once I complete this deal, it’s only going to make me a better racer [when] I get back to run around the house.”