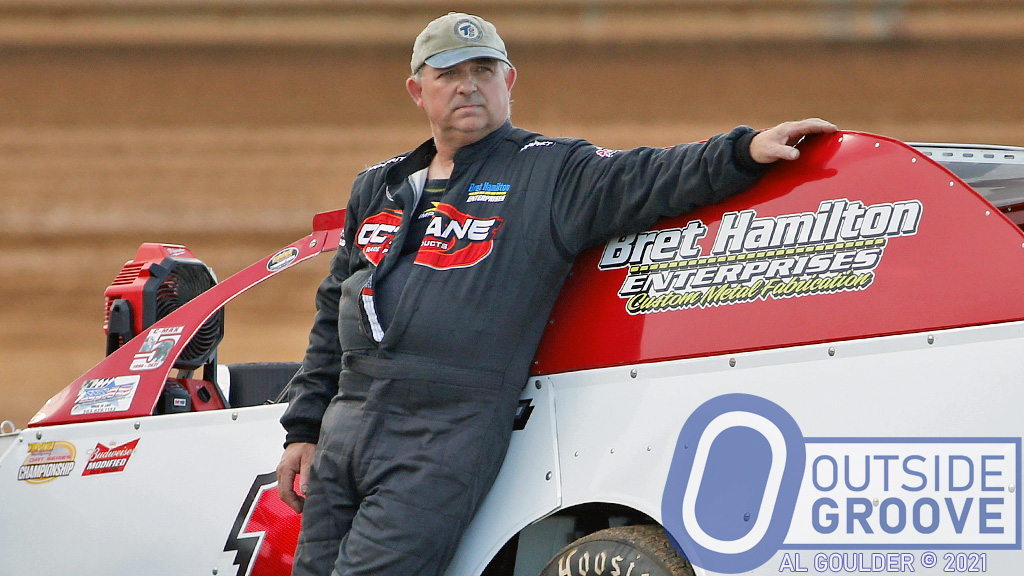 Throughout his life, Bret Hamilton took calculated chances. The journey took him from his native Iowa dirt tracks, to the NASCAR big leagues, to owning Bret Hamilton Enterprises, a successful race-car-building and fabrication company.

While growing up, Hamilton helped his father, Tom Hamilton, in his race shop. By day, the elder Hamilton worked at John Deere. At night, he built race cars.

“I was nine years old and could cut and bend tubing,” Hamilton, 59, of Powhatan, Virginia, said. “Those skills took me through life.”

“I saw an ad in ‘National Speed Sport News’ — NASCAR racer and team owner Emanuel Zervakis was looking for help,” said Hamilton. “I called and someone there told me to send a résumé.”

Hamilton did as he was directed, but heard nothing back. So, he took matters into his own hands.

“I called and asked for Emanuel,” Hamilton said. “[Zervakis] picked up the phone. He seemed hesitant to hire me. I said, ‘I’d drive out there and work for a week for free. If you want me to stay, I’m there. If you don’t want me, tell me — there will be no hard feelings.’”

Hamilton’s determination persuaded Zervakis to give him the job. Other race teams and customers soon noticed his fabrication skills. Hamilton then moved to Charlotte for a job with NASCAR car owner Bob Whitcomb and driver Ken Bouchard. He later worked with drivers D.K. Ulrich and Ernie Irvan.

However, Hamilton grew tired of Charlotte and moved back to Richmond. He started building mostly pavement cars out of a garage at his home. As the venture grew, he moved into another building, eventually taking over the entire space.

“At 32 years old, I decided to build my own shop,” said Hamilton. “I went to the banks and when I said my business was racing, they showed me the door.”

Hamilton borrowed from several racing acquaintances to build his shop. After five years of making on-time payments, he showed those records to the bank, which finally granted him a mortgage. Hamilton made the final payment on the loan for his 6,000-ft. building last week.

Through most of his time in the South, Hamilton raced, too, both on pavement and dirt. He currently steers a dirt modified at Virginia Motor Speedway in Jamaica, where he sits fifth in points. His wife of 33 years, Tina, insists they race every weekend.

“[Tina] tells me what I need to buy in order to win,” Hamilton said. “She never questions what it costs.”

Hamilton is thankful for taking calculated chances. It resulted in a lifetime of wonderful memories.

“In racing, like life, you find your own pathway,” said Hamilton. “Don’t be afraid to make a move. If it doesn’t work out, you can make another move and try something different.”