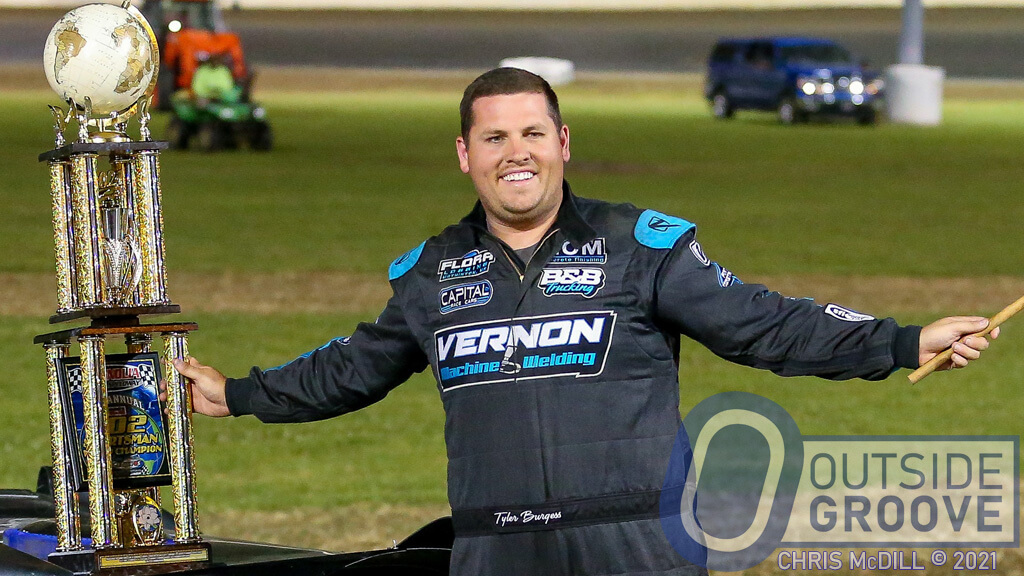 As his kids get older, Tyler Burgess sees a day when he no longer steers a race car. With the sunset on the horizon for his racing career, Burgess hoped to put together his finest ride yet. It seems he has achieved that. So far, Burgess has won every race he entered this year. Those four races included the $3,000-to-win Sportsman World Championship at Magnolia Motor Speedway in Columbus, Mississippi, last weekend.

“We didn’t have the money to compete,” Burgess said. “We won a couple of races, but it wasn’t where [we felt] we had a chance to win [every night].”

His family-owned team sold their crate late model mid-season, along with two 604 engines, to raise funds for a top-notch late model sportsman to race the following season. Then, longtime sponsor Jeremy Flora, of Flora Logging, introduced Burgess to Brad Tomlinson. Tomlinson owns Big B Logging, B & B Trucking, and a late model sportsman.

“Brad had a car sitting there,” said Burgess. “It was an older car, a 2010 Blue-Gray [Rocket chassis]. Brad wanted me to try it. We ran second four times [and had one DNF]. He felt like I was blessed with a talent and wanted to help me get into [a better car]. He bought a motor, put a carburetor and shocks on [the new ride]. He’s got a lot more faith in me than myself.”

Burgess picked up a 2019 late model from Capital Race Cars. He brought it to the shop of Scott Dedwylder, who went over it for Burgess.

“We’ve been fast right out of the box,” Burgess said. “I’ve run four races. We have won every one of them, and I think we’ve led every lap.”

His mother, Shelley, and father, Ernie, own the late model sportsman. Burgess’ father and sister, Libby, help on the car Quitman, Mississippi, where Burgess is originally from.

“My parents live four-and-a-half hours south of me,” said Burgess, who works as a financial analyst for Old Dominick Distillery in Memphis, Tennessee. “I’ve got the blessing of just showing up and driving. My dad and sister take care of the rest. They love it 10 times as much as I do.”

“That’s what [my father] likes to do — work on things,” Burgess said. “The race car is his [project] away from work. He works on it every night.”

“[My sister] does everything, from changing tires, to changing the gear, to gassing the car,” said Burgess. “She knows way more about the race car than I do. She comes home [from college] Friday nights; helps on Friday, Saturday, and Sunday; and then goes back to school.”

With those who believed in him — his sponsors, such as Jeremy Flora and Brad Tomlinson, and his family — Tyler Burgess is having a career year. It will be one he can tell his children — Mills, 3, and Colton, soon-to-be 1 — about for years to come.

“It’s not always been this good,” said Burgess. “I’ve been on both ends of it, [including] where you get so frustrated you want to quit. Right now, we’ve been very blessed.”