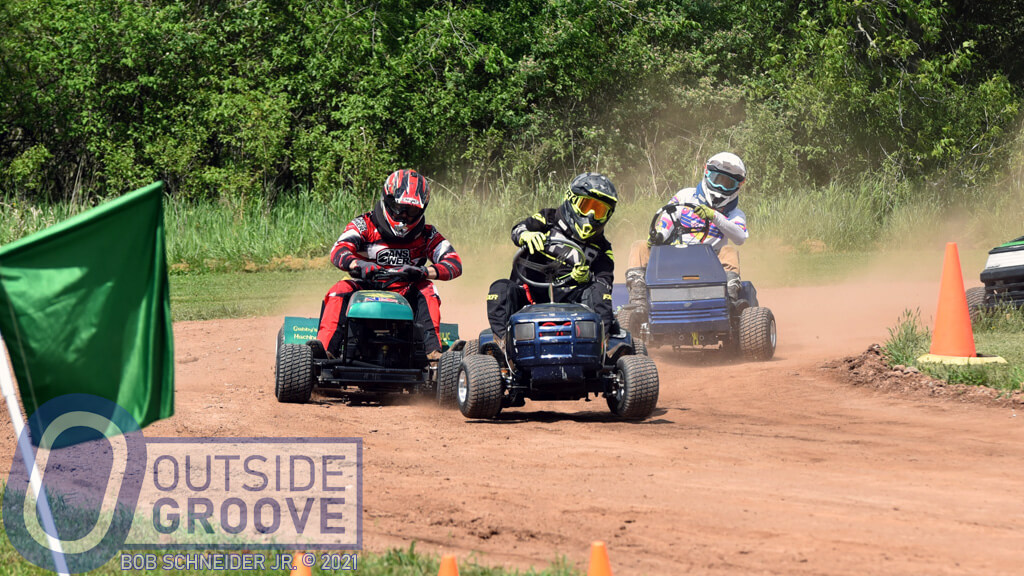 Pavement late model car owner Jeremy Griesbach enjoys the finer things in life — beer, hunting, and racing. When his favorite tavern during deer hunting season, Anglers Bar & Grill in Fremont, Wisconsin, came up for sale, he had to get in on it. However, unbeknownst to Griesbach, the tavern came with a racetrack.

“My cousins and I hang out there during what we call ‘beer hunting,’” Griesbach, of Pewaukee, Wisconsin, said. “ We never make it out of the woods, so it’s more beer hunting than deer hunting. We thought we’d be honest with our wives. They got tired of us coming home with nothing and it looked like our clothes were clean.

“We would hang out [at the bar] and after five, six, eight hours [at the bar], we always said if we could buy this place, we would. Unfortunately, the previous owner passed away last fall. My cousin [Josh Keeney and his wife, Amy,] and I ended up buying it. I heard stories about lawnmower racing, but I didn’t know it was at this bar. The track was a bonus.”

The 920 Lawnmower Racing Club puts on the races at the 1/10-mile clay oval.

“They do all the work,” said Griesbach. “They maintain the track … promote the races. We’re just the [track] owner. They had about 200 to 300 spectactors for the first race … and about 30 lawnmowers. As an asphalt guy, I thought it was pretty cool. ”

Griesbach fields a super late model for his 19-year-old son Grant Griesbach, who has raced in the class since he was a young teen. Other drivers in that class, Steve Apel and Chris Blawat, also own dirt tracks, although behind their houses and they hold go-kart events.

“We’re talking about doing something in conjunction with one of our lawnmower races, and have a neutral site for these late model drivers [racing go-karts],” Griesbach, who also works as part-owner and President of Development for Cobblestone Hotels, said.

Racers want to race, anytime with just about anything. The bar fuels the passions Jeremy Griesbach enjoys.

“Racing is an addiction,” said Griesbach. “[The track] attracted me to the bar even more, because Lord knows I’ve had a racing problem for 15 years now. Might as well just add to that.”