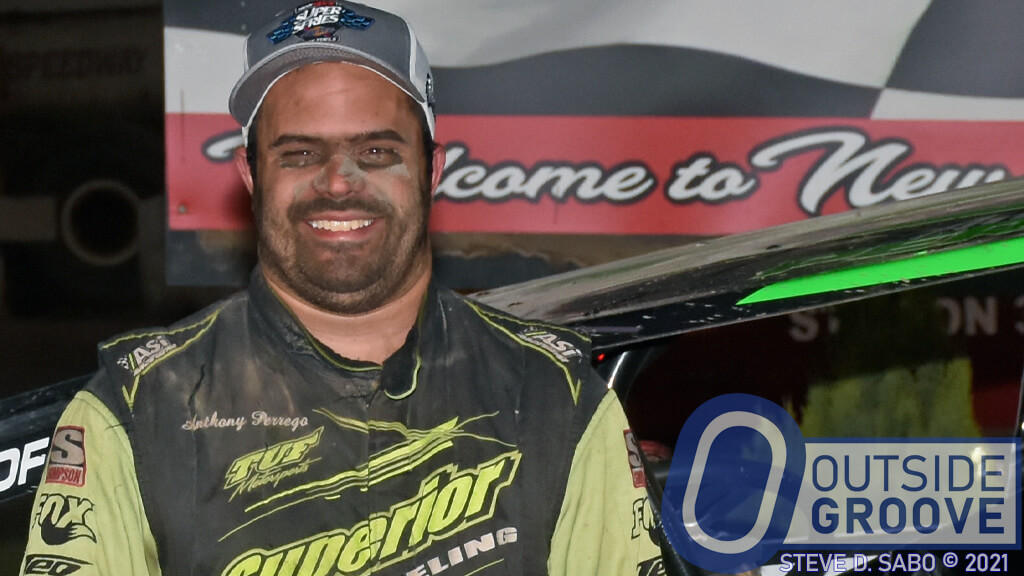 With a face covered in dirt, Anthony Perrego conquered the event dubbed the “Dirty Jersey” on May 25. The win was Perrego’s second in three Short Track Super Series events, occurring at New Egypt Speedway in New Jersey.

“My helmet didn’t seal that well,” said Perrego, 27, of Middletown, New York. “I didn’t realize it was that bad. The dirt wasn’t getting into my eyes. It was staying below my eyes.”

For most of the race, Perrego didn’t have clean air to work with. He started fifth and quickly fell back to eighth.

“We ran a little bit harder tire than most,” Perrego said. “It didn’t fire off that well. But, after that third yellow, it took off.”

When the leaders — Mike Mahaney and Max McLaughlin — encountered lap traffic, it opened the door for Perrego, who made a charge from eighth to the victory. As he stood at the podium, his race-worn mug stood in stark contrast to the fresh-looking faces of second-place finisher Mahaney and third-place McLaughlin.

“I’ve only had this helmet for about six months,” said Perrego of his Simpson helmet. “I usually tape around the shield, so [no dust or dirt] gets in there. But, with this helmet, I never had that problem until then.”

Simpson’s Aaron Zentgraf said helmet sealing issues can be caused by a variety of issues. While he has not seen the helmet Perrego raced with, he offered some general advice to racers experiencing dust getting into their helmet.

“If there’s duct tape on a Simpson helmet, something’s not right,” Zentgraf said. “Bring us the helmet or contact us so we can address it. More than likely, [dirt racers having sealing issues with their helmet] may need a chin flap in the helmet, or may need the eyeport seal replaced, or it may simply be [they should] focus on how they put the shield on.”

Anthony Perrego currently leads the point standings for the Short Track Super Series North region and sits second for the South region. He said he has a new Simpson helmet coming and looks forward to future events with clearer vision.