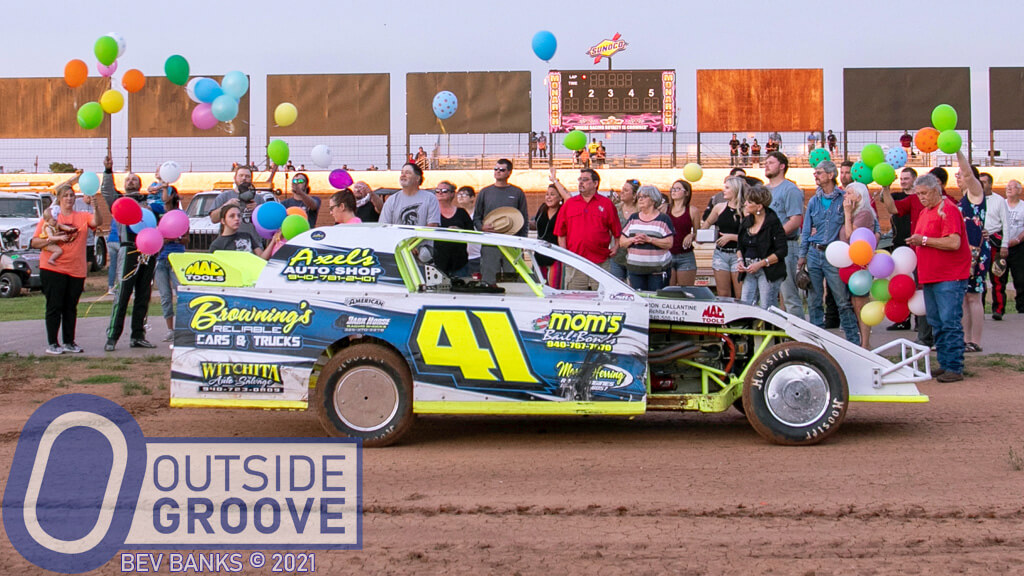 With Josh Cournoyer’s USRA limited mod in the foreground, the local racing community paused to remember his late crew member Scott Burkett. They released balloons in Burkett’s memory prior to the start of racing at Monarch Motor Speedway in Wichita Falls, Texas, last Friday.

Scott Burkett, 54, of Wichita Falls, Texas, died in the pits at Lawton Speedway in Oklahoma during their show on May 8.

“His passing was sudden and unexpected,” Cournoyer, of Wichita Falls, Texas, said. “He was wiping the car down so it would look perfect for the heat race. He collapsed and passed away right then and there from a heart attack.”

Burkett left one son, Garrison, and a sister, Laci Carr Hawkins, as survivors. They, along with Cournoyer, planned the memorial with the help of Monarch Motor Speedway owner and promoter Shannon Kelton.

“Scott was the life of the party,” said Cournoyer. “There was no one in the pits that he didn’t talk to. He knew everyone. And, he would give the shirt off his back to help anyone at the track.”

When Cournoyer transitioned from pavement to dirt four years ago, Cournoyer’s father, Hank, suggested Burkett as a crew member. Burkett worked as a truck driver on weekdays, often showing up to help Cournoyer on weeknights, and always on race nights.

“He was also the team chef,” Cournoyer said. “He would be cooking enough sausages on the grill for anyone who wanted one on race night.”

“My most recent memory of him was carrying my two-year old daughter, Kerigan, to me in victory lane when we won,” said Cournoyer. “He so good with kids. He pitched in to help my wife Hillery, keep track of [my five children] at the track.

On Friday night, Cournoyer won his heat and the feature at Monarch Motor Speedway.

“It was just crazy seeing that checkered flag,” Cournoyer said. “I was overwhelmed with emotion thinking about how pumped up Scott would be. He would have been the first one there to congratulate me.”

The family and friends plan to scatter Burkett’s ashes over Monarch Motor Speedway and at his son’s cattle ranch this week.