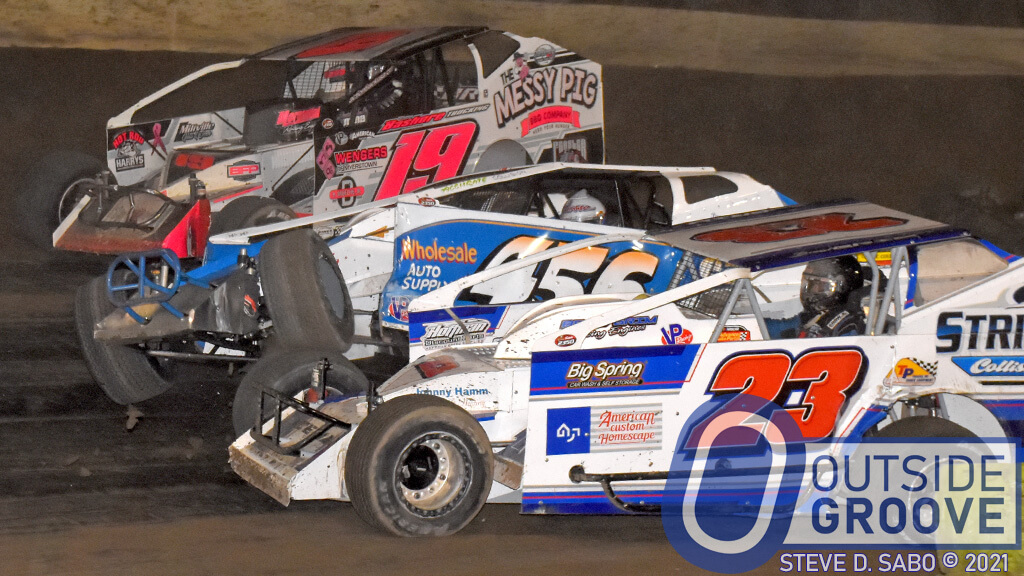 The latest DNF for Jesse Leiby (456) seemed characteristic of his season. With a damaged front axle and unable to brake or steer, he tried his best to avoid trouble (and thosearound him). The incident occurred during the modified feature last Saturday at Grandview Speedway in Bechtelsville, Pennsylvania.

“For whatever reason, this hasn’t been my year,” said Leiby, 24, of West Milford, New Jersey. “Out of eight races, I’ve finished only one feature.”

This past Saturday looked promising — until this happened.

“I started third in the feature, and on the one restart I got shuffled back,” Leiby said. “One to three laps later, I got a good run out of turn two and I was going to tuck up behind [Craig] Von Dohren. As I got behind him, he bounced [the car] off the wall. When he did that, his rear bumper knocked the front end out of my car. So, I had no brakes and no steering going into turn three. It was one of those deals where you hold on for the ride.”

The ride proved to be a bit bumpy.

“As the car slowly came down the track, a couple guys got into me,” said Leiby. “Luckily, it was nothing too serious. The worst of the damage was a front axle, all the bolt-on stuff, and a left-side Panhard bar. The car is sitting in the garage, all back together, ready to scale [to race on] Saturday.”

A seasoned veteran of the sport, Leiby has seen the highs and lows of racing. He started racing 17 years ago, and won the 2017 sportsman championship at Orange County Fair Speedway in Middletown, New York. After that success, he moved into modifieds.

However, last year, he raced only in the sportsman class. His modified car owner, Dave Eastlake, took a hit to his party rental business. With the pandemic winding down, Eastlake and his daughters, Daryl and Erin, once again are fielding a car for Leiby.

Despite his string of DNFs, Jesse Leiby remains upbeat.

“We keep pushing and look at the positives,” said Leiby. “One week, I was running in fifth, keeping up with [Duane] Howard and all the heavy hitters … and then I got caught up with two lapped cars spun out in a turn.