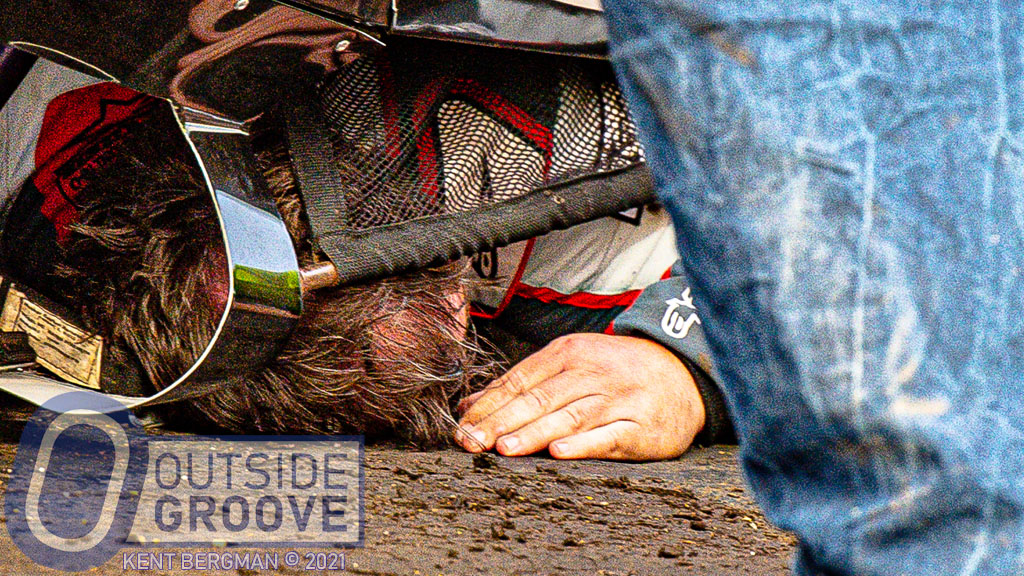 Dustin Mooneyham gasped for air after hanging upside-down in his late model for what he estimated to be over five minutes. The incident occurred during the heat race of the Dirt Track Bank Cash Money Super Dirt Series stop at Salina Highbanks Speedway in Pryor, Oklahoma.

“You never think you will be trapped in your own race car,” Mooneyham, of Aurora, Missouri, said. “At first, I didn’t want to release my belts. I think of myself as a tough guy, but I found that you are not so strong when you are upside-down. I was hanging there, helpless. When I heard a track crew guy say, ‘We can’t get him out,’ and I felt like my eyeballs were going to pop out, I started to gasp for air.”

Mooneyham wound up upside-down when his car went sideways on the first lap of the heat race. Then, a car T-boned his ride, rolling Mooneyham over.

His late model from Barry Wright Race Cars used the tall version of the company’s roll cage. The cage remained intact after the wreck. However, the rollover damaged the sheet metal, particularly the decking, which trapped Mooneyham inside. Weighing at 260 lb., Mooneyham struggled to escape.

“The 13-inch opening was down to eight inches or less,” said Mooneyham. “I couldn’t even get my head through the hole to escape.”

Mooneyham started to release himself when he felt he couldn’t stay upside-down any longer. The track crew lifted the car and tried to make an opening for Mooneyham to escape.

“I pulled off my gloves, because I had to release my helmet strap,” Mooneyham said. “My glasses went flying, and luckily the track crew picked them up and saved them. I released the harness, and the track crew lifted the car, and they were able to pull me out.”

Mooneyham exited the car without serious injury. He sat in a Kirkey full-containment seat with a Hooker Harness five-point harness. He wore a brand-new Zamp helmet, but no head-and-neck restraint system. The car incurred damage to its sheet metal, shocks, springs, and lower control arms.

“I just had a strawberry from the belts,” said Mooneyham. “But, it took me an hour to calm down, catch my breath, and regain my strength.”

“[The deck] bent up six inches — something we never thought of,” Mooneyham said. “We need restraints to hold the sheet metal down.”