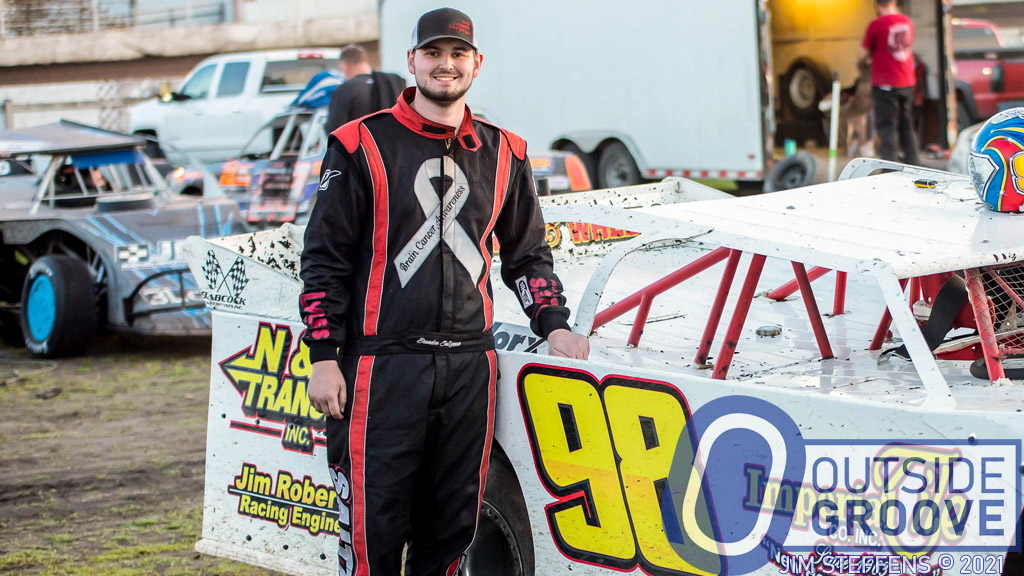 Nearly two years ago, while Saltzman worked on his late model, he felt his left arm go numb. He also noticed sound coming from a nearby TV, but saw no picture on it. He told his mother what went on. She advised him to eat better and made him a sandwich.

He ate it, but the symptoms continued. His mother then took him to a nearby hospital, CHI Health Midlands in Papillion, Nebraska.

“She didn’t think it was anything serious — neither did I,” Saltzman, an HVAC warehouse worker from Omaha, Nebraska, said. “The hospital got me in right away. They did a CT scan, and when I returned to the waiting area, my mom was crying. I asked, ‘Why the f–k are you crying?’ Five minutes later, I was in a med flight to Creighton University Medical Center — Bergan Mercy Hospital [in Omaha, Nebraska], which is only 20-minute flight. My condition was that serious.”

Surgeons cut Saltzman’s head open from ear to ear to remove a massive tumor. While undergoing chemotherapy, he only missed one race in 2019. In 2020, he returned to victory lane at I-80 Speedway in Greenwood, Nebraska. He placed fifth in points at I-80 and just missed the championship at Shelby County Speedway in Harlan, Iowa, by seven points.

“This year, I’m feeling my progress in battling cancer is really good,” said Saltzman, who added he still endures chemotherapy treatments while in remission. “As long as the doctor says I can race, I’ll be racing.”

Saltzman’s connection to the sport runs deep. His grandfather, Harold Thomas, raced. His father, Scott Saltzman, served for many years as crew chief for noted dirt late model driver Ed Kosiski. Brandon Saltzman wouldn’t know a life without the sport he grew up in.

“Racing drives me,” said Saltzman. “Everything for me revolves around racing and my family. It keeps me alive.”