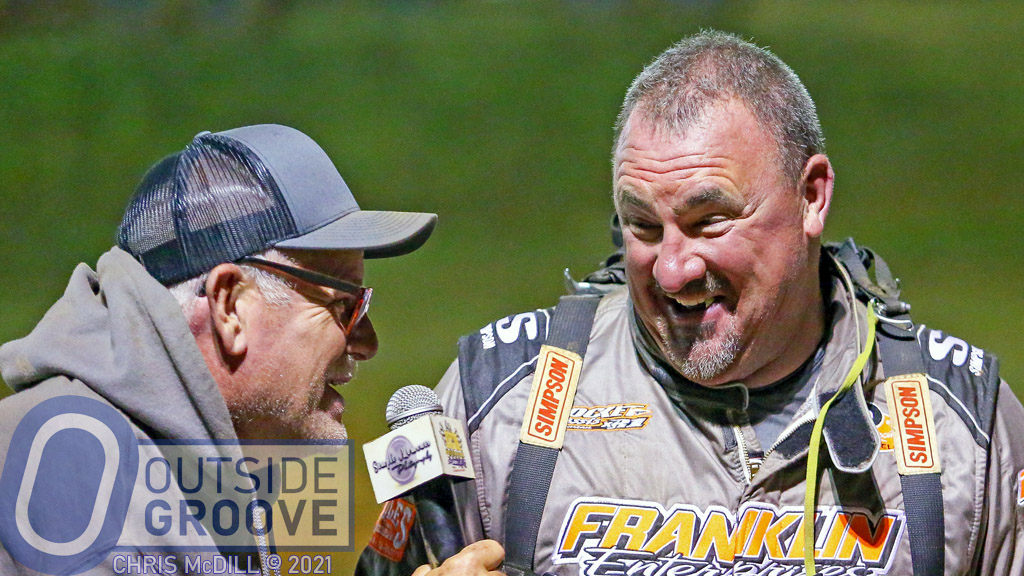 Billy Franklin shared a laugh with announcer Robert Bradford in victory lane. He had just won the Mississippi State Championship Challenge Series (MSCCS) race at ECM Speedway in Bremen, Alabama. The win proved generosity pays off for Franklin, who’s not only a driver, but also a sponsor of several racers over the years.

“Growing up, Michael and I didn’t have a lot,” said Franklin, 46, of Calera, Alabama. “Mom was not in our life. We were raised by our granddaddy and grandmother. We worked all our lives since we were little kids right through high school.”

His upbringing made Franklin into the racing humanitarian he is today.

“I don’t know about race cars, but I know about people,” Franklin said. “I’m a good reader of people — I was taught that by my grandmother.”

The list of drivers Franklin has backed reads as a who’s who of dirt late model racing in the South. He first helped Ronny Lee Hollingsworth, of Northport, Alabama, in 2016.

“He’s the reason I got involved full-fledged in racing,” said Franklin. “I owned a couple of cars he drove and their engines.”

In 2018, when Brandon Overton, of Evans, Georgia, parted ways with a team, Overton’s crew member, Grant Pearl, asked Franklin to put Brandon in a car.

“I told him to come down and take my car and my hauler,” Franklin said.

“Dennis came up to me in the pits and asked me if we were kin,” said Franklin. “I told him I didn’t think so.”

Nevertheless, Franklin treated the other Franklin like family, helping him with transmissions, rear ends, and a chassis from Barry Wright Race Cars.

This season, Franklin helps Chris Madden, of Gray Court, South Carolina, with cars and engines. Madden currently sits second in points for the World of Outlaws.

“[Chris] is a super nice guy and takes care of my equipment,” Franklin said. “He’s taught us a lot about race cars. I don’t know much about shocks and springs. Chris has made a difference for me.”

Often, what goes around comes around in racing, and Billy Franklin proves that holds true for generosity, too.