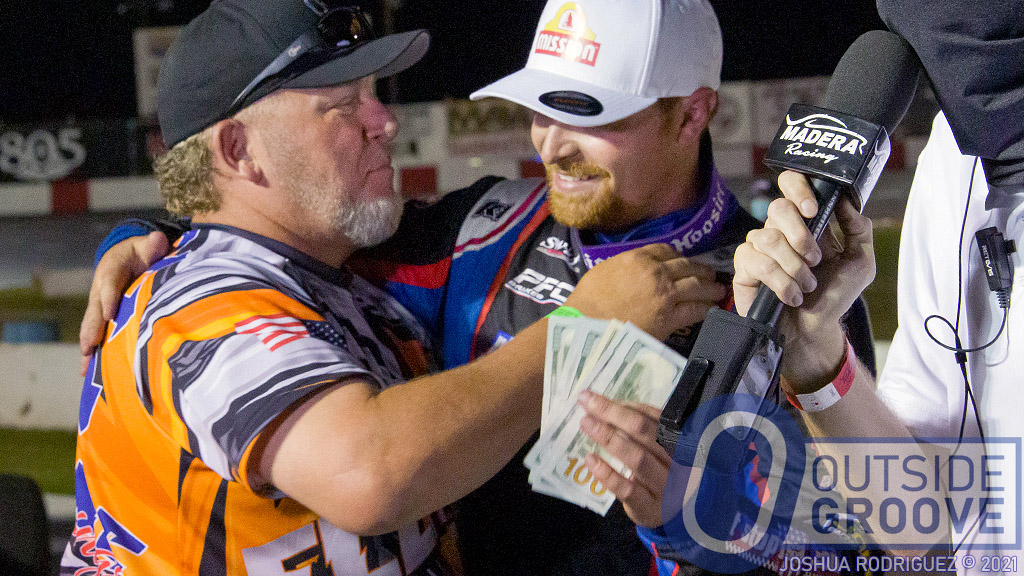 When Kyle Tellstrom saw a $1,000 bonus offered to win the feature after electing to start in the rear, he quickly embraced the challenge. After starting 18th in the feature, Tellstrom worked his way up to the top spot to win round one of the Mission Modified Series at Madera Speedway in California.

“Racing is expensive,” said Tellstrom, of Ukiah, California. “The opportunity to make extra money to pay for my tires for the next race was appealing. I was happy with the way my car was performing. [I] thought I had a good shot of pulling it off.”

Mount Juliet, Tennessee, modified fan Terry Deal Sr. (pictured in victory lane with Tellstrom) owns Economy Heating & Air Conditioning, which offered the bonus. He held up ten $100 bills to entice Tellstrom to take up the offer. Deal used to race modifieds prior to moving to the Volunteer State.

Tellstrom set a new track record in qualifying, with a 14.789-second lap. He forfeited the top starting spot for a chance to earn Deal’s bonus. By lap 28 of the 60-lap feature, Tellstrom assumed the lead. He held onto first place for the remainder of the race for the win. It earned him $1,000 for the victory and another $1,000 with Deal’s bonus.

Kyle Tellstrom won the North State Modified Series championship last year. For 2021, he has an aggressive schedule. Tellstrom plans to race in several series and tracks across the Western states. As with Madera, he embraces the unique challenges of each oval.

“There are lots of racetracks that will hold races for modifieds this season,” Tellstrom, who earns a living as a representative for PFC, said. “I’m up for the challenge. Working on my stuff to become better is what I love. There are quirks in all the tracks and making the car’s setup work while trying to make the extra time you need from the driver’s seat makes it fun.”