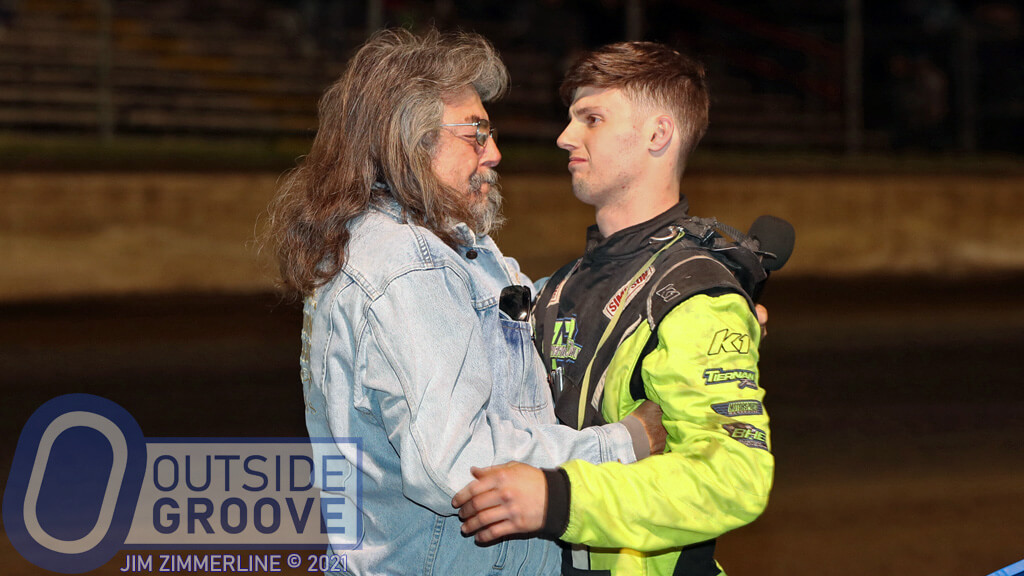 “I looked up to Jake as a fearless driver, a mentor,” Longnecker, 24, of Ogden, Iowa, said. “I bought my sport mod from him. My sister, Tara, who also raced in the sport mod division, and I looked up to him. He always had time to answer our questions. He was family to us.”

“Every lap of that race, I said, ‘Why Jake? Why did you do that? Life is too short as it is,’” said Longnecker. “Don’t make life shorter by committing suicide. Jake left everyone else wondering what we did wrong. The only person who got closure was Jake.”

Longnecker’s speech hit home for Walrod. Walrod lost his only son, Clinton, to suicide in 2002.

“There needs to be more people like you who can talk about suicide,” Walrod whispered to Longnecker in victory lane.

Walrod, of De Soto, Iowa, has attended the races at Stuart since 1964.

“I knew Jake very well,” Walrod said. “We texted back and forth three days before he passed. He was in a low spot. I made him promise me he wouldn’t hurt himself. That’s one promise I wish had never broken.”

The full-time minister often gets called to funeral services for those who have taken their life.

“That fact that [suicide] is not talked about does no good,” said Walrod. “The key to understanding suicide is facing the fact that there is no understanding it. I had no one in my life tell me what to expect or how to continue on with life. I speak from experience.”

“You can’t dwell on the ‘whys’ or ‘what-ifs’ — they will eat you alive,” Walrod said. “Hunter [Longnecker] took the words right out of my mouth. Suicide has to be talked about, not hushed up. There is always someone to listen to you — local clergy, a police officer, a teacher, or a guidance counselor.”