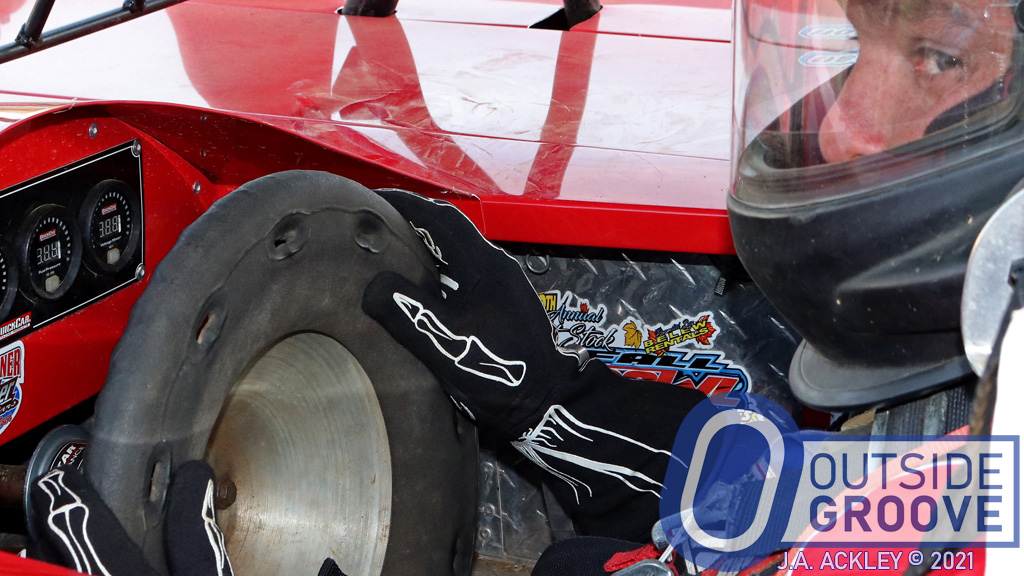 Whatever car Bartley Grant races, whether a KDRA super stock or late model, he makes sure to bring with him this spokeless steering wheel. Solid aluminum fills in the center section of the wheel. Because of that, Grant said he can avoid a serious hand injury — such as the one his brother-in-law, Edwin Bentley, had once endured.

“It’s been about five years ago — my brother-in-law races late models … and he raced at a little track called Lucky 7 Speedway [now defunct, in Whitesburg, Kentucky],” said Grant, 47, of Mount Vernon, Kentucky. “The outside wall was a rubber belt that came out of the coal mines. He got up next to the outside wall, his right-front tire hooked into it, and his thumb was through the steering wheel. It basically ripped his thumb off.”

Thankfully, doctors were able to save Bentley’s thumb. The incident made Grant search for a solution to avoid what happened to his brother-in-law.

“The first steering wheel we had like that, we made with a piece of Lexan zip-tied to a regular steering wheel,” Grant said. “I had done some research and Speedway Motors sells the aluminum one that I use now. We order those and we run those ever since.”

Speedway Motors calls the steering wheel the “Speedway 15 Inch Aluminum Solid Steering Wheel.” It retails for $69.99. While not a common sight at the track, Speedway Motors’ Greg Nicol said they plan to keep selling them.

“We still move them,” said Nicol of the sales for the steering wheel. “We’ll keep building them. [“Speedy”] Bill [Smith, the late founder of Speedway Motors,] believed in them when we first started selling them [in 2003]. Not many pieces for race cars hang around for 18 years. It does a good job. We get many repeat customers, once they get used to using them.”

Grant earns a living as a race car fabricator, owning his own shop, Rainmaker Racecars and Fabrication in Mount Vernon, Kentucky. He needs to keep his hands in working order to pay the bills.

“If you can’t use your hands, most people can’t work,” Grant said. “[My brother-in-law is a] flight medic. That impacted his job because he was not able to use his hands for several months. He had a couple of surgeries, but he’s all good now.”

Bartley Grant said the lack of spokes doesn’t affect his driving. His results prove it. Grant consistently runs up front and wins races while racing the spokeless steering wheel.