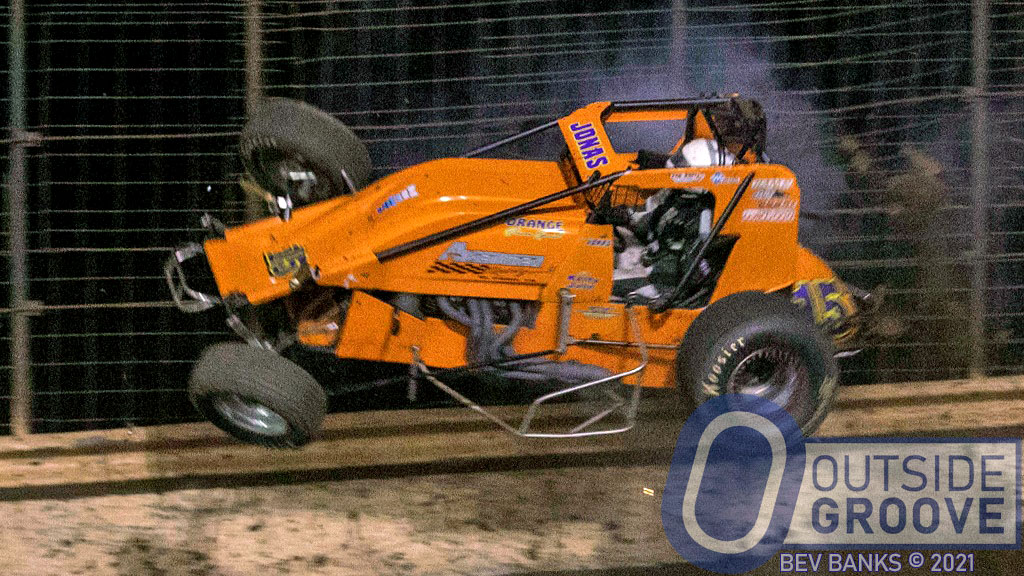 As Jeremy Jonas found out, moving to the outside groove can be tricky. He flipped his car during the ASCS Elite Non-Wing Series feature at Monarch Motor Speedway in Wichita Falls, Texas. Jonas walked away with sore shoulders, a bruised ego, and a totaled race car.

“The place to race was on the bottom of the track,” said Jonas, of Denton, Texas. “I realized moving up to the top would be risky. Turns one and two had a little cushion. Turn three had about one foot of grip, right next to the wall, and no cushion. I moved to the outside groove, hit turn three right for five or six laps, and then I missed it.”

Jonas moved up a bunch of positions. He was fighting for 10th when he lost much of that progress.

“I went into the turn just about 5 mph faster than I did the previous lap,” Jonas said. “I tagged the wall, and my car started flipping. It was pretty violent. I remember one major impact with the ground that was pretty hard and hurt my shoulders.”

Jonas escaped without serious injury. He sat in an ISP full-containment seat, with a Simpson five-point harness and Simpson arm restraints. Jonas wore a Bell GTX.3 helmet, with a Simpson Hybrid head-and-neck restraint.

His sprint car from Avenger Chassis didn’t fare as well.

“The car was pretty much destroyed,” said Jonas. “We saved the engine and the steering wheel. The chassis did its job — it kept me safe. It absorbed tremendous impact and not a single weld broke.”

Luckily, his car owners, Jesse and Kay Graham, have another chassis. With the help of the racing community, Jeremy Jonas looks to return to racing this weekend.

“All of the drivers I race with came together and donated spare parts to get us back on the track,” Jonas said of his ASCS Elite Non-Wing Series competitors. “Racers help one another. When one is down, they are there in time of need. I’ve helped other racers, now they helped me. That’s what racing is all about.”