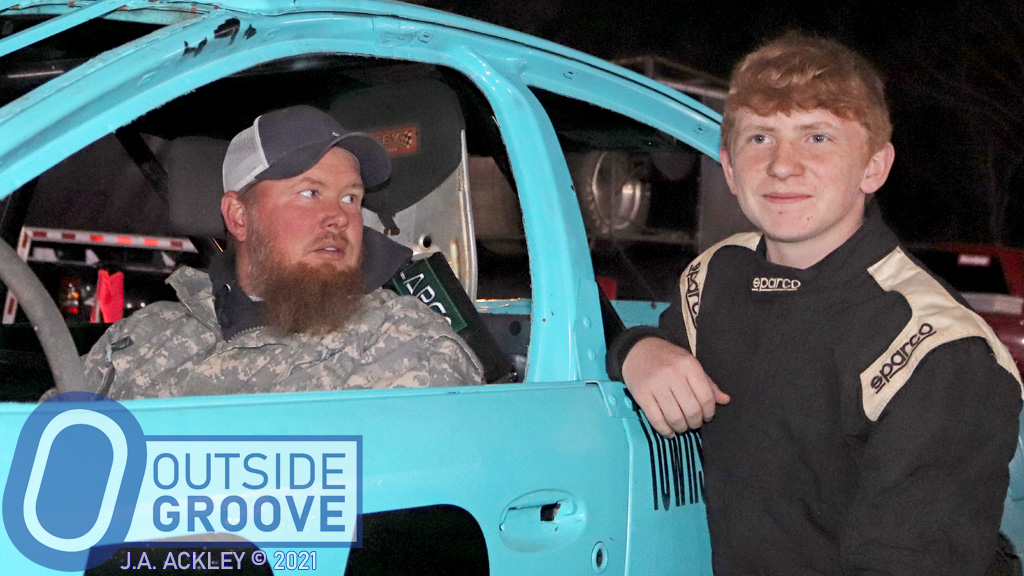 “I figured if I was going to the track every week, I might as well bring two cars and try to keep up with him,” Guy, 38, of Athens, Tennessee, said.

Guy grew up around the sport in Connecticut. His father, Guy Ingham, and uncle Jeff Cook raced primarily at a pair of Connecticut tracks — the now-defunct Plainville Stadium and the New London-Waterford Speedbowl.

“I learned how to weld, like when I was eight [years old],” said Guy of his experience helping his father.

Unfortunately, as Guy became of age to race, his father sold his racing equipment.

“I always had four-wheelers, dirt bikes, street bikes,” Guy said. “I’d get my adrenaline rush with other things.”

Like his father, Nate, 14, enjoys motorized vehicles. He and his father stumbled upon how Nate could satisfy that need.

“Me and dad were going to work one day, we had seen one of the [front-wheel-drive] cars on a trailer at the gas station,” said Nate. “[My father] thought it would be a good idea.”

Last fall, Guy joined the fray by running an enduro. On Saturday, he raced his first race with his son at Mountain View Raceway. Guy finished 10th in a field of 22 cars. Nate’s night ended early, coming in 19th.”

“I was just trying to go out there and have fun — and keep my eye on [Nate],” Guy said. “We only got a few laps in before Nate lost that ball joint. I saw him get tangled up with a couple of cars. I could see the tire was off the car and he gave me a thumbs up when I came by him, so I knew he was all right.”

Racing provides a way for the entire Ingham family to spend time together. His 10-year-old twin sons, Evan and Aiden, dubbed the “Tire Twins,” as well as his two-year-old son, Nolan, and wife, Sara, help in their own ways in the shop.

“It’s the rest of the week leading up to those 15 laps [in the feature],” said Guy. “When you get home, it’s changing parts off the cars, checking cars, doing oil changes. You get many hours during the week as quality time.”