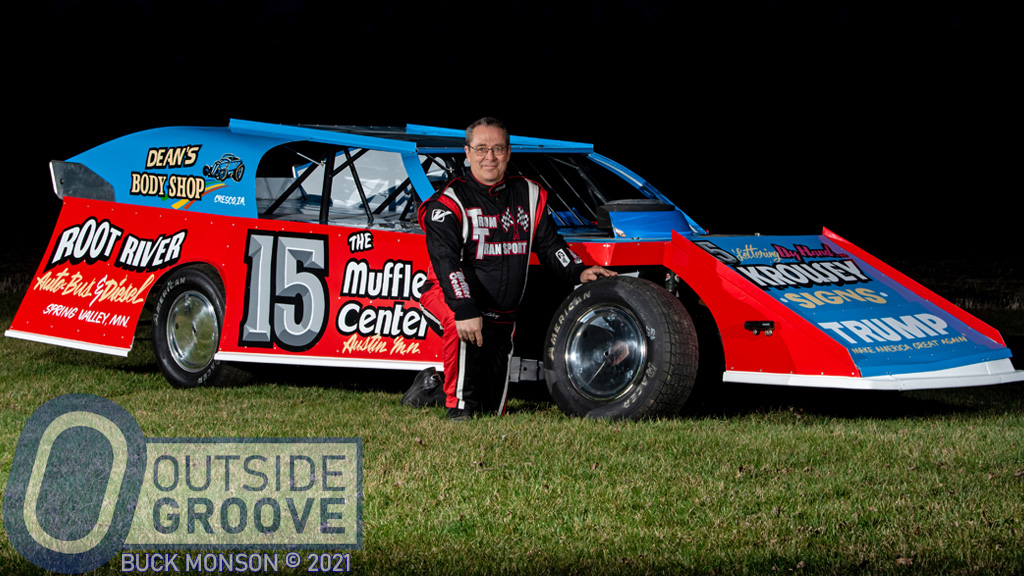 In a world dominated by wraps, Chris Loberg feels he will stand out with his hand-lettered USRA modified. In addition, hand lettering provides many other advantages over wraps, according to Loberg.

“Simple lettering — no crazy stripes — just letters with contrasting colors is what I wanted,” Loberg, of Elma, Iowa, said. “I wanted my car to have [the] sponsors’ lettering readable from anywhere on the racetrack.”

He enlisted the services of sign painter and USRA hobby stock racer Shawn Krousey, of Winona, Minnesota. Krousey has 31 years of experience in lettering signs by freehand. Every season, he applies his craft to eight to 12 race cars. With an education in sign-painting from Minnesota State Community and Technical College in Detroit Lakes, Krousey cringes at some of the wraps he sees.

“There are so many cars with wraps that you cannot read,” said Krousey. “They are not only blurry, but nothing in the wrap sticks out. The use of contrasting and complementary colors is all wrong. The lettering is all the same, and no sponsor’s name is noticeable or readable.”

Loberg not only chose hand-lettering over a vinyl wrap for its aesthetics, but also for its cost. He had discussed this with his partner at Killer by Karau Chassis, Darwyn Karau.

“I maintained that hand-lettering a car is more economical in the long run,” Loberg said. “A wheel rub will burn through the graphics of a ‘stickered’ car. Tire marks can be easily removed from hand-painted car, and the paint could be touched up with a brush.”

Chris Loberg said wraps cost between $800 to $1,000. When damaged, racers have to remove sections, reproduce them, and then apply the new segment of wrap to the sheet metal. Krousey charges $650 to $700 to hand-letter a car — a process that takes two days or more.

“Every year I hear, ‘Lettering won’t make your car go faster,’ from someone who is talked into a vinyl wrap,” said Krousey. “They don’t get it. Lettering keeps you on the track. People see who your sponsor is [and] you want that sponsor back year after year.”