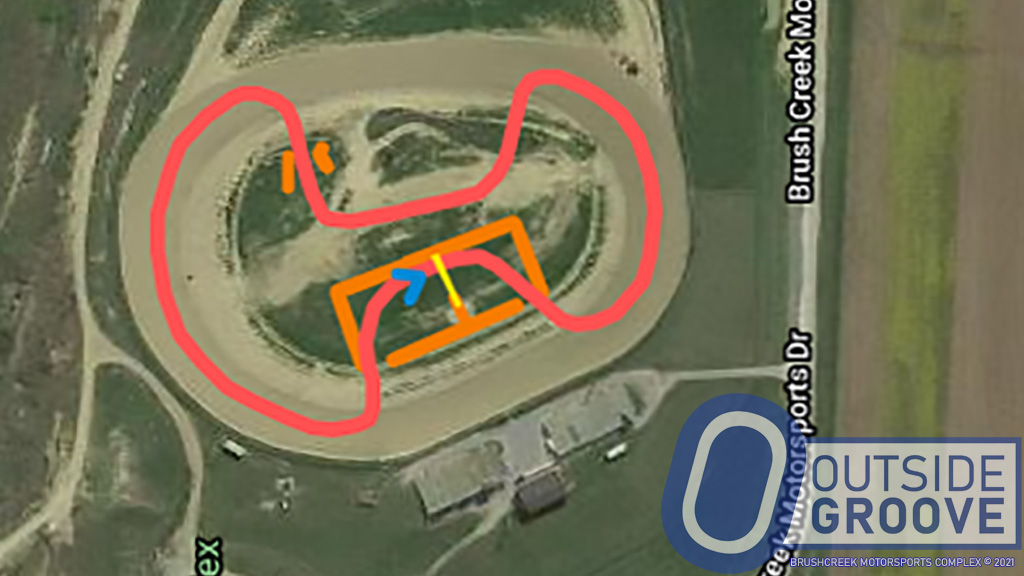 Brushcreek Motorsports Complex took a page from those at Charlotte Motor Speedway. They’re creating a road course within their oval in Peebles, Ohio, for a special event on Saturday, June 19.

At first, Partin was reluctant about his father’s off-the-wall idea posed last year. He warmed up to the concept during the off-season. When Partin announced it, he said he received a strong, positive response. What makes it more astounding is the show solely features support divisions — Legend Cars, sport compacts, and Crown Vics.

“I was surprised how many fans said they’re coming that night,” Partin said. “I’m like, ‘You wouldn’t watch a Legend Car, sport compact, Crown Vic show on an oval.’ They’re like, ‘We don’t care what’s racing. We’re coming to see what happens.’”

While the majority of Charlotte Motor Speedway’s road course existed before NASCAR’s first “Roval” race, Brushcreek Motorsports Complex had to create one from scratch.

They installed drainage piping for the ditch between the oval and the infield to create a transition from the oval to the infield. The infield already contained a demolition derby pit, with walls surrounding it. Brushcreek plans to widen the entrance and exit to it and incorporate that section into the course. They’ll add additional concrete barriers to help outline the rest of the track.

Unlike nearly all road courses, this one will have a dirt surface throughout its layout. With Brushcreek recently resurfacing the dirt oval for this season, they’ll use the leftover clay to surface the infield portion of the road course. They’ll also add some run-off areas.

When completed, the road course will be an eight-turn, barbell-shaped circuit measuring roughly 4/10-mile. That’s roughly a tenth of the size of the internationally-known, 14-turn Road America in Elkhart Lake, Wisconsin.

The race will incorporate several road racing rules. Partin said they’ll use corner cautions, when necessary. Racers will qualify in sessions where they can go out for as many laps as they wish per a given time period. However, Partin ruled out any racing in the rain.

“I want it to be a legitimate race,” said Partin. “It’s going to be quirky, [but] not a gimmick.”

Ultimately, Partin views creative promotions as the key to the success for Brushcreek Motorsports Complex.

“The crazy stuff is what keeps us afloat,” Partin said. “You can get online now and watch any kind of wild, extreme sport you want. It’s hard to compete with that.

“The creative tracks are going to figure it out. We got to change with the times.”