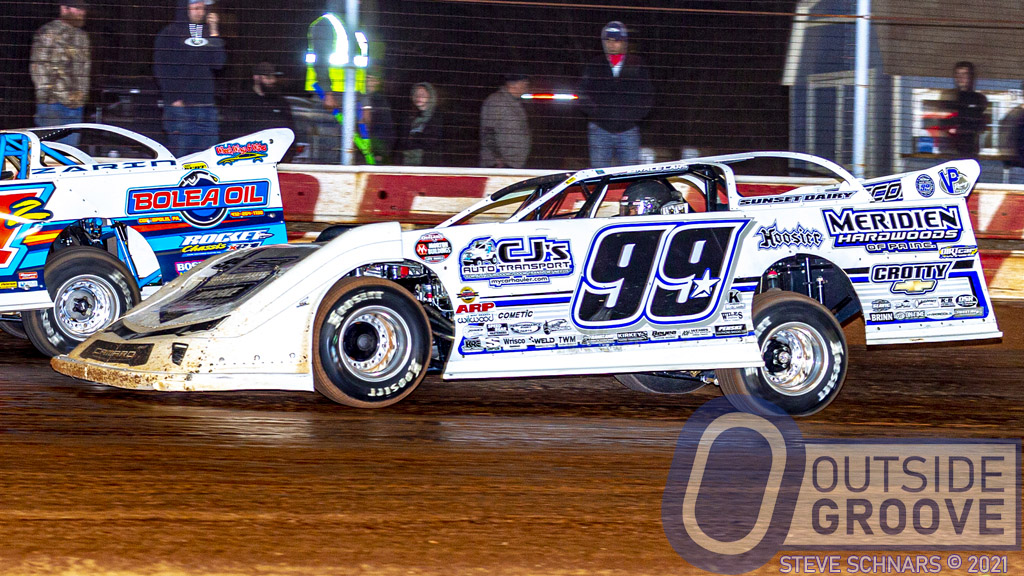 In his first race in a full-size race car, Logan Jaquay placed 13th in a field of 26 cars. The finish seems more surprising considering it occurred during the Zimmer Service Center ULMS Late Model Series North Region race at Sharon Speedway in Hartford, Ohio. However, Jaquay knows how to compete at a higher level. He wrestles in the NCAA Division I program at Edinboro University of Pennsylvania.

“To be a high-level wrestler, there is a lot of training — you have to put in a lot of work,” Jaquay, 18, of Bear Lake, Pennsylvania, said. “The same is true of racing. You have to work on the cars and understand them, and then perform and become a better driver.”

Jaquay had only raced junior go-karts years ago, and for a limited time. However, he had worked at the race shop owned by his uncle Boom Briggs and Chub Frank since his middle-school days.

“I started with tires, and as time went on Boom and Chub taught me more and more,” said Jaquay. “The more I traveled with Boom over the past six years, the more I learned.”

Briggs decided to put Jaquay in one of his spare cars for the ULMS race at Sharon Speedway. Early on, Jaquay seemed to struggle, spinning out in practice.

“He told me to just follow the cars in front of me,” Jaquay said. “After a few laps, I got a handle on things — I knew what I could expect of the car.”

Briggs advised his young protégé to drive around and not get in the way of other racers. Jaquay started the feature from the rear of the field. As the race went on, he gained enough confidence to pass drivers with many more years of experience than he had.

“I surprised myself and surprised Boom,” said Jaquay. “I started to pass cars on the bottom. As the night went on, I felt better and better as a driver.”

Logan Jaquay plans to race twice a week — at Eriez Speedway in Erie, Pennsylvania, and The New Stateline Speedway in Busti, New York. His schedule runs from May to August, when school is not in session.

“I have to stay in shape for wrestling,” Jaquay said. “I’ll go to the weight room to work out and do my wrestling drills four times a week. I’ll keep working at the shop, too. I have to stay sharp for both sports.”