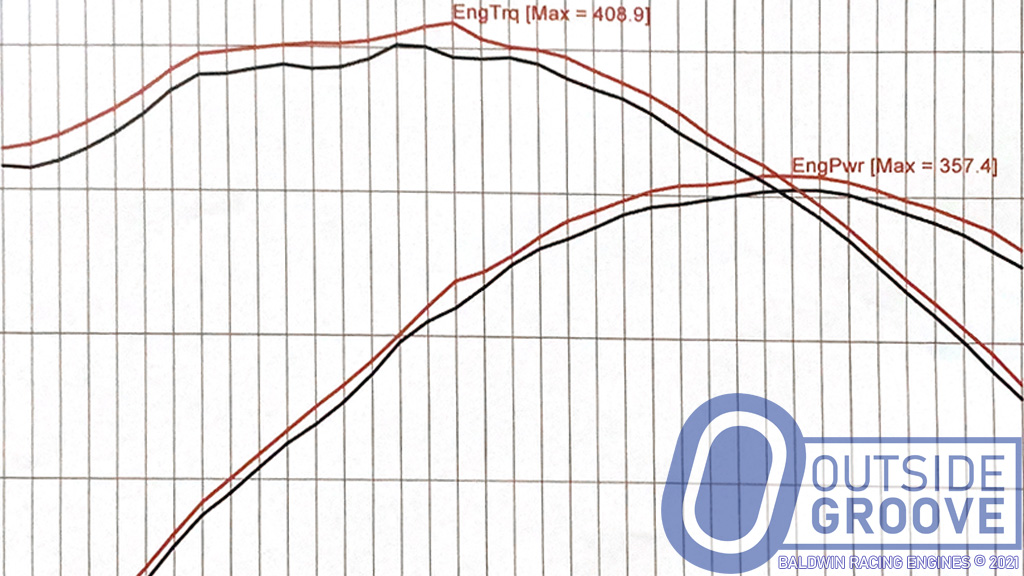 Some Chevrolet crate engine racers prefer 110 racing fuel or a mix of 110 with pump gas. Baldwin Racing Engines discourages both practices. Instead, they recommend 93 octane pump gas, because it does not contain ethanol, or 91 octane pump gas from a reputable brand name.

“A customer brought in cans of VP 110 to dyno a 602 crate,” Jeff Baldwin, of Baldwin Racing Engines, said. “I told him I would prefer he did not use such high octane. I did the comparison not to be mean, but to show my customer the difference in engine performance on each fuel. It proved that lower octane is better for crate engine performance.”

Baldwin explained why the engine performed worse with 110 race fuel.

“The burn rate of fuel is slower as octane increases,” said Baldwin. “Crate engines do not have the compression necessary to burn the higher octane fuel efficiently.”

“Our crate engines do not have the compression to take advantage of higher octane fuels,” Bill Martens, of Chevrolet Performance, said. “The main premise of the GM crate program is to keep costs down. The lower compression promotes longevity and durability, which ultimately results in reduced operating expense.”

Martens recommends focusing on tuning to find performance gains with crate engines. In particular, he suggests paying close attention to oil viscosity, quantity of oil in the oil pan, effects of aeration, and carburetor adjustment.

“[Racers] can usually find a couple of horsepower by tuning the engine on pump gas,” Martens said. “We did not see that kind of gain using 110 octane fuel.”

“The origin of the crate engine is for consumer use,” said Arce. “It calls for electronic fuel injection [EFI], which is computer-tuned through oxygen sensors. When you use a carburetor on a crate engine, tuning the carburetor becomes the defining skill to gaining horsepower and torque.”

“You want your fuel to be the same every time you race,” said Turza of racers mixing fuels. “The average racer cannot mix pump gas and race fuel precisely. The only advantage to doing that is saving a few dollars.”

“Our 110 fuel is not made for any crate engine, and it never was,” said Turza. “For 40 years, it has been a formula used for high compression engines.”

VP Racing Fuels offers a line of fuels specific to Chevrolet 604 and 602 engines.

“Pump fuel contains ethanol and our crate fuels have no ethanol, therefore they are less corrosive,” Turza said. “Pump fuels vary widely in tolerance. Our tolerances are very tight. Our fuel is consistent. Consistency in your fuel is important to getting the best performance from a crate engine tuned for a specific fuel.”

Some crate racers use E85 from the local gas station. The “85” in “E85” indicates 85% ethanol. VP offers its own version of E85, called C85. The company says it provides a more consistent blend than gas stations, which offers varying percentages of ethanol.

“Corrosion is a major disadvantage to using an alcohol-based fuel, such as E85,” said Arce. “The advantage is more power, but at what price? If you use E85, you’ll burn more fuel, which will require carrying more fuel [at the beginning of a race]. Because E85 at the pump has looser tolerances, if you decide to use it, I recommend to buy it from an established brand at a gas station with high turnover.”

VP’s fuels, unlike pump gas, include lead and other additives for high-performance applications.

“We use proprietary ingredients in our fuel that result in better performance,” Turza said. “Leaded fuel protect valves and the fuel has a lubricating value. Octane is almost irrelevant. A fuel designed for crate engines is relevant.”

Martens said Chevrolet does not test its engines with leaded fuel, nor does its race program engines use it.

“Engines used to have an exhaust valve problem in the 1970s,” said Arce. “GM hardened the exhaust seats in the crate engines because there was no longer a lead cushion when unleaded fuel was used. Today, I know of no failures of exhaust or intake valves in crate engines.”

Arce chooses pump gas for its cost savings and convenience, and recommends it for his customers.

“I like going to the pump [at a gas station], filling up my pickup truck, my generator, my race car, and heading to the track,” Arce said. “It saves time and money.”