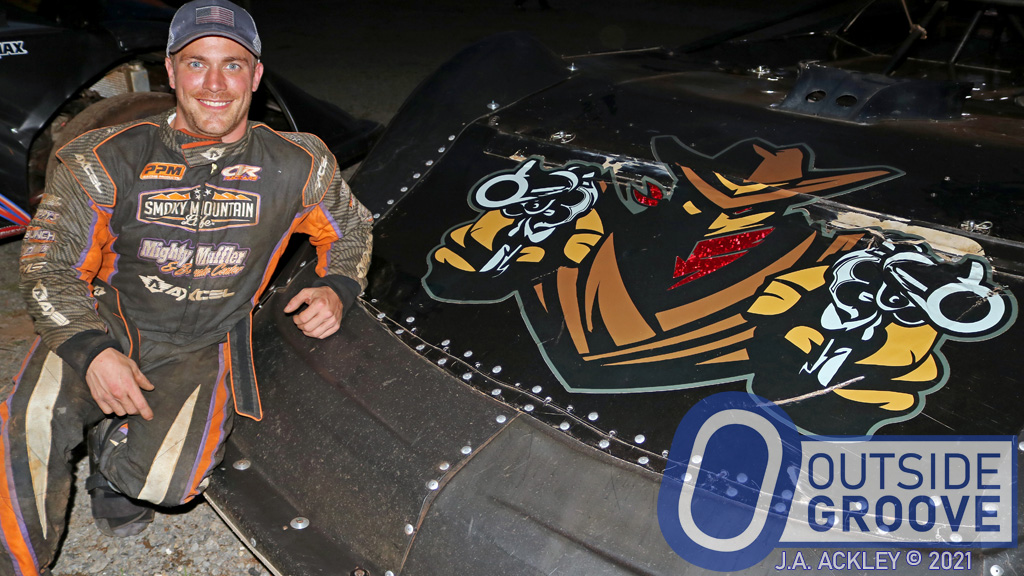 Brandon Godsey took an unconventional path to behind the wheel of a race car. He went from riding bulls, to announcing rodeos, to announcing races, to steering sportsman late models. It may not seem like the most logical route, but it makes sense when looking back at his journey from one bullring to another.

Brandon Godsey, of Crossville, Tennessee, started riding bulls at age 14. He began competing at rodeos professionally a few years later. Godsey’s bull-riding abilities won him many buckles, the rodeo equivalent of trophies or big checks. During that time, a rodeo owner asked him to fill in a for an announcer who couldn’t make the event because his car had broken down. Godsey felt like a fish in water behind the microphone.

“I have the gift of gab,” Godsey said. “I can talk. [Announcing] comes normal to me.”

As the wear and tear of riding bulls wore on Godsey, he began to gravitate to racing. While crewing for Crossville, Tennessee, crate late model driver Jesse Lowe, Godsey heard their hometown track, Crossville Speedway, needed an announcer. He went back behind the mic in 2016, except this time at the races. It earned him accolades on a Facebook group, where Facebook folks voted him eighth best announcer in Eastern Tennessee (out of eight announcers). Godsey treasured that title so much that he eventually put it on his race car.

In 2019, Godsey rode his last bull, coincidentally in a racetrack’s parking lot, at I-75 Raceway outside of Sweetwater, Tennessee. While he hung up his cowboy hat, Godsey still had the urge to compete.

“I always wanted to drive race cars,” said Godsey. “I finally got to the point where I could afford it. Luke Crass gave me a car to start out with.”

Brandon Godsey made his racing debut last season in Crossville Speedway’s B-sportsman class, a division intended for rookies such as himself.

“It was a big learning experience,” Godsey said. “I had never raced. I never even raced a go-kart, nothing like that.”

Godsey had to learn the ropes of driving race cars.

“The biggest thing for me was that when the car feels like spinning out, the car’s doing what it should do — you’re not spinning out,” said Godsey.

“The first time I got into a car, it felt like I was at a rodeo when I was younger,” Godsey said. “My adrenaline was going and I was shaking a little bit.”

He won his first race in 2020 and has already made an impression this year. Last January, at The Hangover at 411 Motor Speedway in Seymour, Tennessee, he turned the second fastest time for the sportsman late model class. He, along with the pole sitter, broke the track record for the division. While a broken J-bar ended his day early on lap one, Godsey remains optimistic for 2021.

In addition, Brandon Godsey returns to the announcer’s booth as the voice for the Topless Outlaws Dirt Late Model Series. Enthused by his success behind the wheel, he hopes to improve on his eighth-place position behind the mic, too.