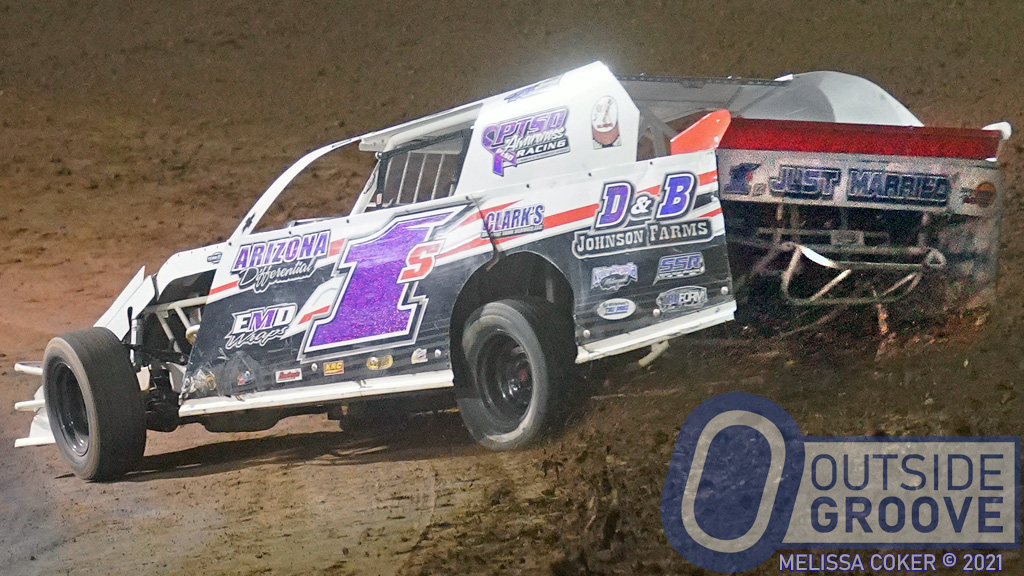 “I don’t mind taking a break,” said Shelby. “I get just as much enjoyment and excitement watching my husband drive my car.”

The couple from Casa Grande, Arizona, met in the pits of Peoria, Arizona’s Canyon Speedway Park 13 years ago. At the time, Shelby raced limited late models on the pavement at Tucson Speedway.

“We’d go in opposite directions on Saturday nights,” Shelby said. “It was hard on both of us because we each wanted to see the other race and help each other out. We’d have to juggle schedules all the time — so I decided to give up pavement for dirt.”

In 2018, Shelby joined Chase in the IMCA sport mod class. Since then, she has earned three feature victories. However, the couple struggled to race together.

One time, Chase put a slide job on Shelby during a heat race. She returned the favor to win the heat.

“He was ranked fifth in the IMCA national points at the time — everyone thought he was so much faster than me,” said Shelby. “So, I had to stick it to him whenever I could.”

The couple decided that racing together created too much stress.

“We are both too competitive,” Shelby said. “Chase decided to move to the stock car division. Now, we can help each other and watch each other race.”

Shelby Alves and Chase Alves married last fall. They recently announced Shelby’s pregnancy. For the near future, Chase will return to the sport mods, steering his wife’s car. Shelby intends to return to the seat someday. In the meantime, she embraces her new role as crew chief.

“I can’t change tires or lift anything,” said Shelby, “but I can still be a good crew chief.”