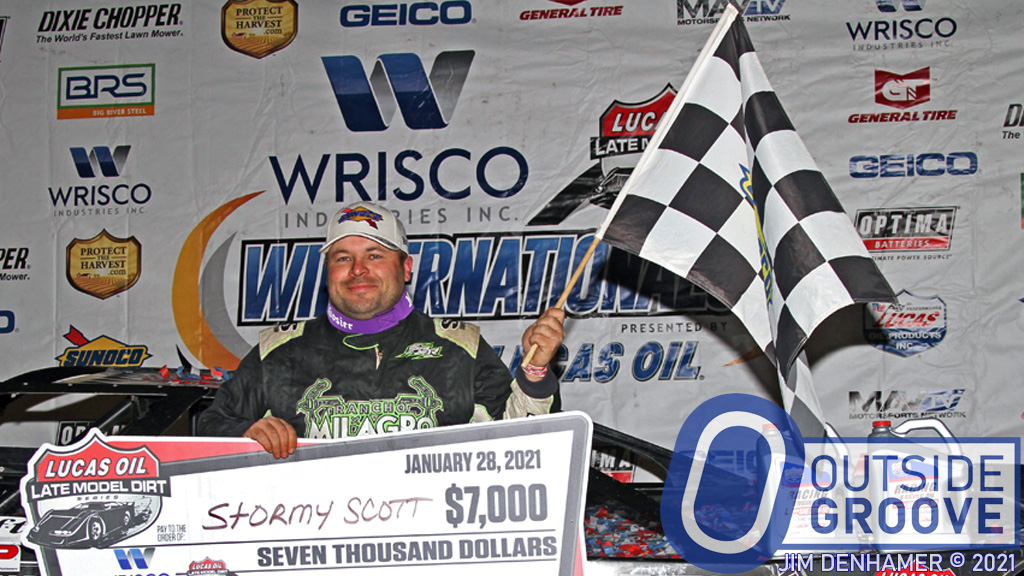 “I’m still smiling because it was my first late model win — not only in the Lucas Oil Late Model Dirt series, but ever,” said Scott, 31, of Las Cruces, New Mexico. “It is exciting to get the year going with a win. Now, the goal is to build off of that win.”

Scott arrived on the dirt late model scene two years ago after making a name for himself in modifieds. Noted crew chief, engineer, and car owner Kevin Rumley, a friend of Scott’s, convinced Scott to change chassis and shock manufacturers.

“Changing to Longhorn and using Bilstein shocks has made a big difference for me,” Scott said. “[Longhorn Chassis and Bilstein] have a lot of people around helping me — [fellow Longhorn/Bilstein racers] Tim McCreadie and Jonathan Davenport. We are all on the same package, which allows us to bounce things off of each other.”

However, don’t mistake Scott as merely copying what McCreadie and Davenport use setup-wise.

“Everyone tries to run the same equipment,” said Scott. “I found what works best for me, not anyone else. You have to set up your car for your driving style. Drivers look for that certain feel from their car, which can be completely different from what another driver and another car feel. When you find the feel that makes you comfortable, it will make you the best.”

“We are looking for someone who can do a little bit of everything on a dirt late model race team,” Scott said. “The position is still open. Life on the road lets you see the country and have a lot of fun along the way.”