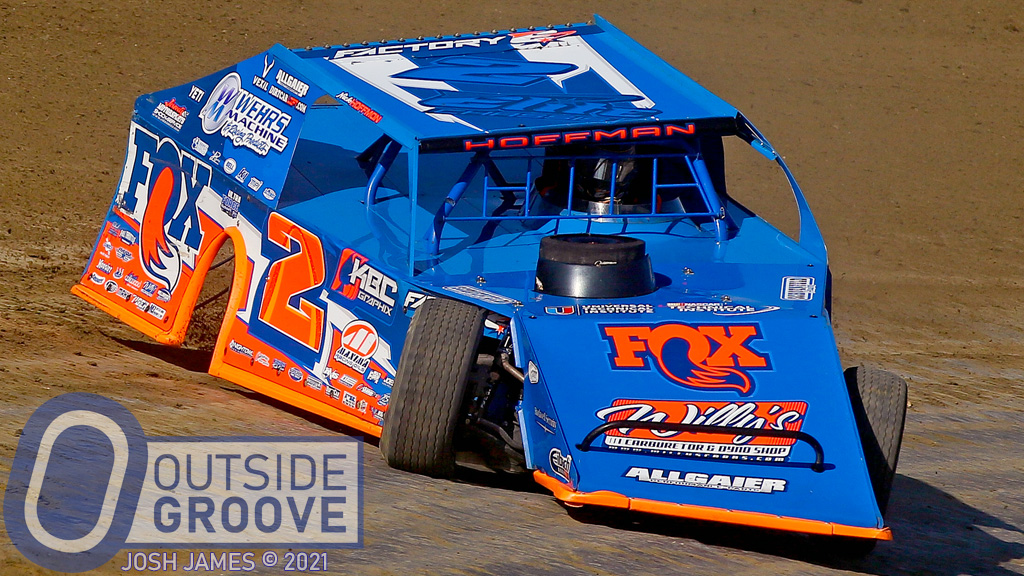 The racing community buzzed about the body that Nick Hoffman had on his DIRTcar UMP modified during the DIRTcar Nationals at Volusia Speedway Park in De Leon Springs, Florida. Some questioned how it could pass tech. Those grumblings grew louder when Hoffman won four features and his sixth Big Gator championship trophy. Four of the top five drivers contending for the Big Gator — Justin Allgaier, Matt Crafton, Garret Stewart, and Hoffman — used cars built by Hoffman’s Elite Chassis.

“My car got teched more than any other car at the Nationals,” Hoffman, of Mooresville, North Carolina, said. “When you start winning, the officials look at you closer and closer. When they asked that I change something on my car, I did so. I even went further than they asked with the changes so there would be no question on my legality.”

Critics claimed Hoffman’s car had more rake — the difference in deck height from the front of the car to the rear — than others. Hoffman agreed. However, in its static state, as tech measures it, Hoffman said the rake met the rules.

“On the racetrack, my cars have more rake,” said Hoffman “This is accomplished though manipulation of the suspension. Greater left-rear droop results in more hike, which in turn gives the car more rake.

As with the deck, racers can create rake with their roof, as well.

“I pulled roof rake out of the body in the middle of the week,” Hoffman said. “We were at 3″ and we went down to 2″ for the last three races to satisfy everyone.”

Nick Hoffman had to make other changes in tech, as well.

“I had a bubble in the roof cap [across the front of the roof, where the driver’s name normally is],” said Hoffman. “The tech inspectors told me to take it out, and I did. The same went for the wicker I had on the right rear quarter panel — I took it off.”

Hoffman claimed he wasn’t the only one eying the roof for aerodynamic advantages at the big, half-mile Volusia Speedway Park.

“A lot of cars there had concave roofs, which help with aero,” Hoffman said. “When they rolled through tech, their roofs are flat. At speed, they change shape. We used to do that, but got away from it. Yet, cars were running with that roof feature. The officials were nit-picking my car because it was so fast. I obeyed them because I did not want to chance being thrown out.”

Some noticed when you look at Hoffman’s car as it lines up to head on the track, the body’s skewed.

“Yes, the right-front corner [of the body] is moved in [toward the chassis]; the right rear corner is moved out,” said Hoffman. “There is no rule about how the skewing a body on a chassis. Mine wasn’t as extreme as others.”

Other Elite Chassis racers didn’t appear to have as much skew as Hoffman’s. Hoffman pointed out every racer sets up their car differently.

“There are many things [racers] can change to fit what they want to get out of their car’s aerodynamic performance,” Hoffman said.

Some have expressed concern over the proliferation of late model technology in the DIRTcar UMP modified class. Critics cite Hoffman’s cars as an example of modifieds inching closer to becoming late models.

“Everything trickles down from the late models,” said Hoffman. “I don’t see the two divisions becoming that close in the future. There are rules. There is an evolution in all race classes. Whatever technology is out there that another division uses, we use.”

“We push the envelope on all the rules,” Hoffman said. “Doesn’t everyone out there try to do the same thing?”