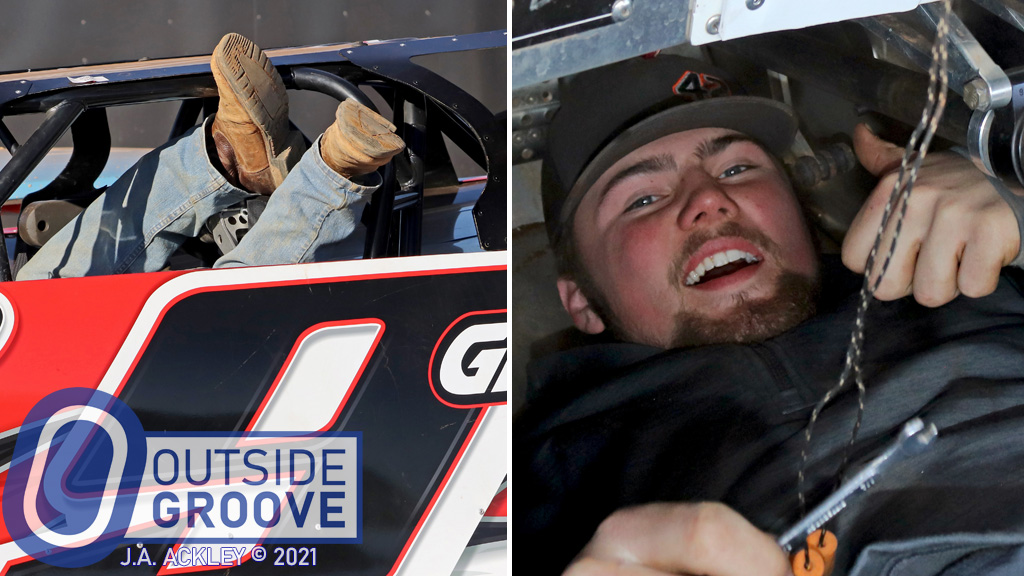 UCRA crate late model driver Brian Womack tabbed Hayden Pritchett (pictured) to adjust his pedals during the Bama Brawl at Fort Payne Motor Speedway in Fyffe, Alabama. Womack said he picked the youngest guy on the crew for the job, as Pritchett is only 18 years old. Certainly, youth helps with that type of task. However, athletic prowess might play a larger role than some may realize, when it comes to working on race cars.

Pritchett grew up in a racing family, with his father, uncles, and grandfather all steering race cars. While he helped his family with their rides, Pritchett competed in other sports. During high school, he played catcher in baseball and wide receiver in football. Pritchett considers his athleticism an asset to the two UCRA drivers he helps — Womack, of Villa Rica, Georgia, and Jake Traylor, of LaGrange, Georgia.

“You’re running around, pretty much all day, at the track [as a crew member],” said Pritchett, of Villa Rica, Georgia. “You don’t have to be athletic, but you have to be in shape, for sure.”

Working with tires and fuel consumes much of a crew member’s day — and both require strength and dexterity. A mounted tire or a five-gallon jug of fuel weighs around 40 lb. The big, bulky late model tires make them awkward to handle. Pouring fuel involves lifting a jug above the rear spoiler to pour it into a funnel in the fuel cell.

Then comes working on the car. It sometimes seems you need the flexibility of a contortionist to reach some of the places on a dirt late model.

“There are tiny places that I can get into that other people can’t,” Pritchett said. “You always have to have that one guy who can get [into] anywhere. It is always good to have a guy who is as flexible, as athletic, and as in shape as I am.”

This season, Hayden Pritchett will make his debut behind the wheel of a race car. He’ll share a street stock with one of his uncles and compete at tracks near his home. As with crewing, you can count on Pritchett using his athletic prowess to his advantage in his new role.