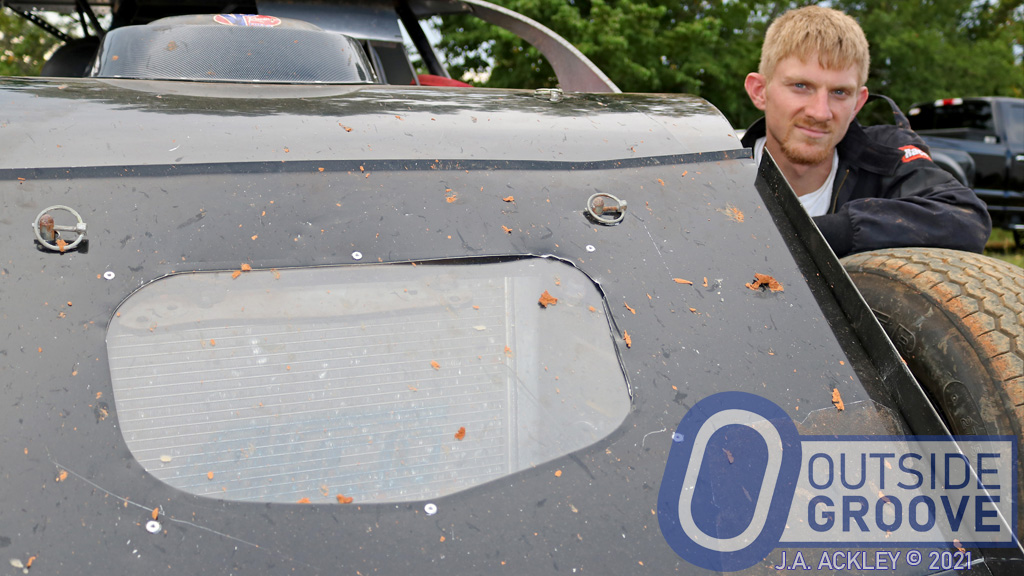 Many onlookers looked at the nose of the modified driven by Chase Lawson with confusion. They wondered, “Why did the nose have a window?” Could it be that Lawson used it to easily check the state of his radiator? Perhaps, it provided Lawson with a glimpse of his steering components. Or, maybe, just maybe, Lawson used it to distract his competition from looking elsewhere on his car.

Theories abound, but Lawson offered a simple explanation — it came with the car when he bought it.

Lawson, of Greeneville, Tennessee, purchased the modified three years ago from Ronnie “Spider” Linkous, of Rogersville, Tennessee. Linkous never raced the car that was originally built by Dirt Works Race Cars in 2013. Linkous bought it from an auction in Charlotte, North Carolina — and that’s where the trail goes cold in the search for the original owner.

So, the window remains a mystery. The prevailing theory is that the window served as an easy way for the team to check the condition of their radiator. In pavement late model racing, many radiator ducts feature a panel or a window to check the radiator.

Regardless, Lawson had the opportunity to take the window out, but he kept it in.

“I liked it — because everybody asked questions about it,” Lawson said. “I had plans to put a body on the car, and we were going to keep that window because we thought it was cool. We thought about putting LED lights in [the nose], and illuminate [the windowed area] as it went around the track.”

Chase Lawson has since sold the car to Brad Dyer, of Mohawk, Tennessee. Lawson plans to race a sportsman late model this season. Dyer said he’ll most likely keep the window, where it will continue to perplex onlookers for the season ahead.