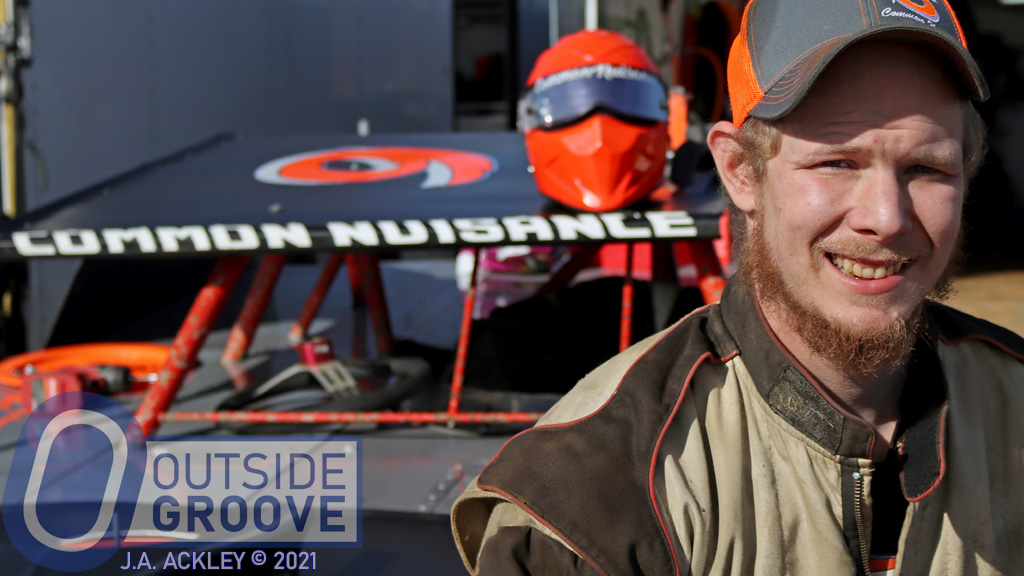 Modified and crate late model racer, John Trowbridge, carries “Common Nuisance,” on his race cars. Trowbridge’s neighbors, who had recently moved in next to his home, helped bestow that nickname on him.

“When I got to the age I could drive [on the street], I got interested in diesel trucks,” said Trowbridge, 30, of Hayden, Indiana. “The neighbors kept calling the cops because of the noise [of the truck]. They kept saying I was being a ‘common nuisance.’ [The name] stuck with me.”

Undeterred, Trowbridge continued toying around with his 2003 Dodge Ram 3500. He adorned the truck with the name “Common Nuisance” and competed with it in sled pulling. It became a fan favorite.

The moniker followed Trowbridge since then, adorning his go-karts and then stock cars. Meanwhile, his neighbors continued to complain about his motorsports activities.

“[The neighbors called the police for] working on a race car, firing it up, and shutting it off, and firing it up,” Trowbridge said. “[They also complained about] getting home at 2 a.m. from racing. One of the times I came in from work and they said I was getting home too late.”

“It was a rocky start in the beginning,” said Trowbridge. “We drove a lot of junk, but it was the thought of getting seat time.”

“I lost the championship by 30 points,” Trowbridge said. “When we went out for the [final] feature [of the year], I had the championship just about wrapped up. On lap two, the rear end broke.”

Despite coming close several times, Trowbridge still continues to chase his first feature victory in a modified. He’ll do so this season with a new chassis, a 2017 car from Diamond Race Cars. Trowbridge retired his 2015 Coyote Racecars chassis after damaging its frame earlier this year at The Hangover at 411 Motor Speedway.

John Trowbridge feels optimistic about the new year. He knows firsthand that perseverance pays off. After all, his neighbors who hated his racing passion moved out a few years ago.