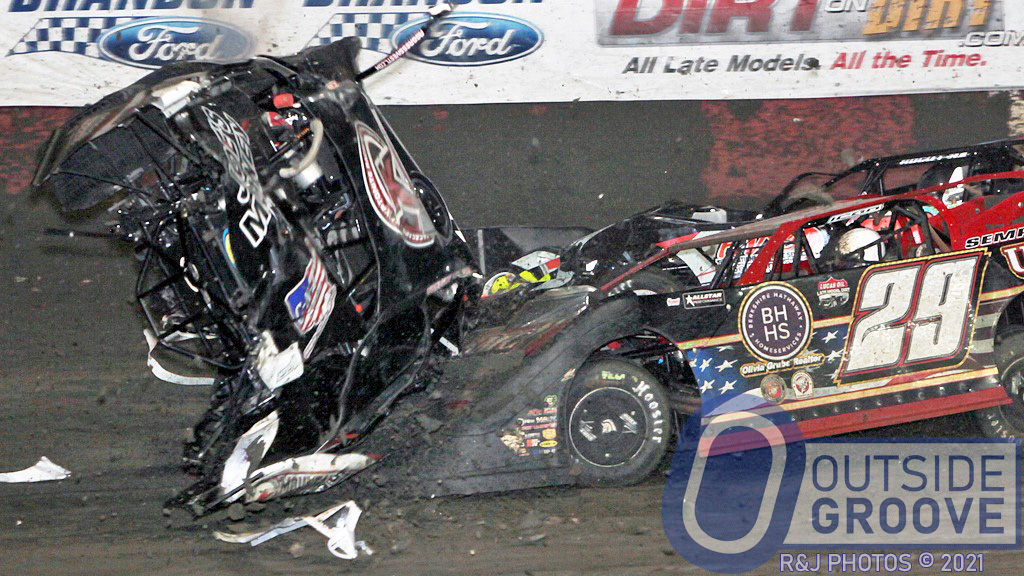 “Zack Dohm swerved to miss Jeff Mathews, who was turned into the wall,” Carpenter, of Parkersburg, West Virginia, said. “Zack’s car made contact with Mathews’ car, straightening it out on the racetrack, facing the wrong direction. Then, my car hit Mathew’s car right side to right side. My car ramped up over Mathews’ car and began flipping like a sprint car.”

Last year, Carpenter had another harrowing accident at Atomic Speedway in Waverly, Ohio, where he incurred a concussion (see “Freddie Carpenter: An Atomic Moonshot”). Thankfully, he emerged from this wild wreck at East Bay with bruises and soreness, but no serious injury.

He sat in an Ultra Shield Race Products full-containment seat, with an Impact five-point harness. He wore an Impact helmet with a Simpson head-and-neck restraint system.

His car, which was built out of Carpenter’s Kryptonite Racecars shop in Parkersburg, West Virginia, needed extensive repairs.

“Everything on the right side, front to rear, was damaged,” said Carpenter. “The motor mount broke, the radiator was ruined, the frame was bent, and the whole body has to be replaced.”

Freddie Carpenter’s crew stripped the car down to its bare frame and began repairs. They used a porta power to straighten the frame as they worked behind Carpenter’s trailer throughout Wednesday.

“We cut off what was bent, and welded new material in where we needed to,” Carpenter said. “We’ll get it as straight as we can.”

A crowd of skeptics gathered around Carpenter’s pit. They questioned whether he could return the car to the track. Freddie Carpenter remains determined.

“We brought enough parts with us,” said Carpenter. “Yes, I am confident we will race this car again. It is the only car we brought, and we will fix it. We will be racing Thursday night.”