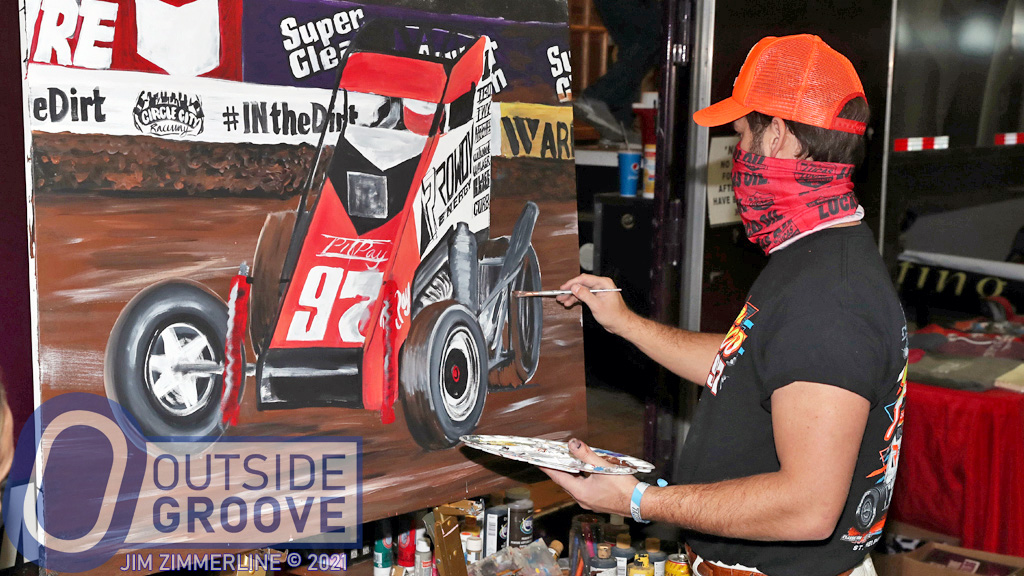 Four years ago, Bobby Moore painted portraits of pet dogs for a living. A friend suggested he paint racing. Moore accepted that challenge. Rico Abreu served as his first subject (and current subject in this photo) at the Lucas Oil Chili Bowl Nationals in Moore’s hometown of Tulsa, Oklahoma. That painting changed the direction of his career. Now his paintings command prices of more than $6,000.

“I grew up going to the Chili Bowl,” Moore, of Tulsa, Oklahoma, said. “When I was a kid, I drew race cars with pencils. Rico was coming off two wins that year when I decided to paint him on a Wednesday. I approached him with my canvas and easel in hand. He didn’t have room for me in his pit.”

Moore improvised. He used a stage typically reserved for MAVTV since they did not cover the event that night. Moore set up his easel and proceeded to paint.

“Later that night, I put the painting up for auction,” said Moore. “It sold right away. I knew immediately I should be painting racing.”

Moore’s talents aren’t limited to the visual arts. He attended St. Gregory’s University in Shawnee, Oklahoma on a baseball scholarship as a catcher. Moore also plays the bass guitar with his two brothers in an indie rock band dubbed The Brothers Moore. They just produced a record in Nashville, Tennessee, and were signed by Dolly Parton’s CTK Management. However, most of Moore’s life has been focused on drawing and painting.

“I have a God-given gift,” Moore said. “I was fascinated with the Tasmanian Devil when I was a little kid. I started drawing my own comic book frames of him.”

Moore typically paints in public, and mostly from memory. He takes snapshots on his phone of cars to have a reference for a car’s decals.

“Live painting has given me notoriety,” said Moore. “People can walk by and see art being made — it’s not the same as watching a stream on the Internet. Now, I’ve gotten more offers to do commissioned paintings than I can count. In the last four years, I made 21 public racing paintings. They are all originals. I don’t make prints. It takes me about 12 hours to complete a painting.”

The next time Bobby Moore plans to paint racing live will be this summer at the Knoxville Nationals at Iowa’s Knoxville Raceway. In the meantime, he has other subjects on his to-do-list. He’ll head to Kansas City to create a portrait of Kansas City Chiefs quarterback, Patrick Mahomes.

“Kansas City Chiefs fans are passionate, and they worship Patrick Mahomes,” Moore said. “I’ll set up on the sidewalk by the stadium, and start painting him. Lots of people will be there. We’ll test the waters, just like we did at the Chili Bowl.”