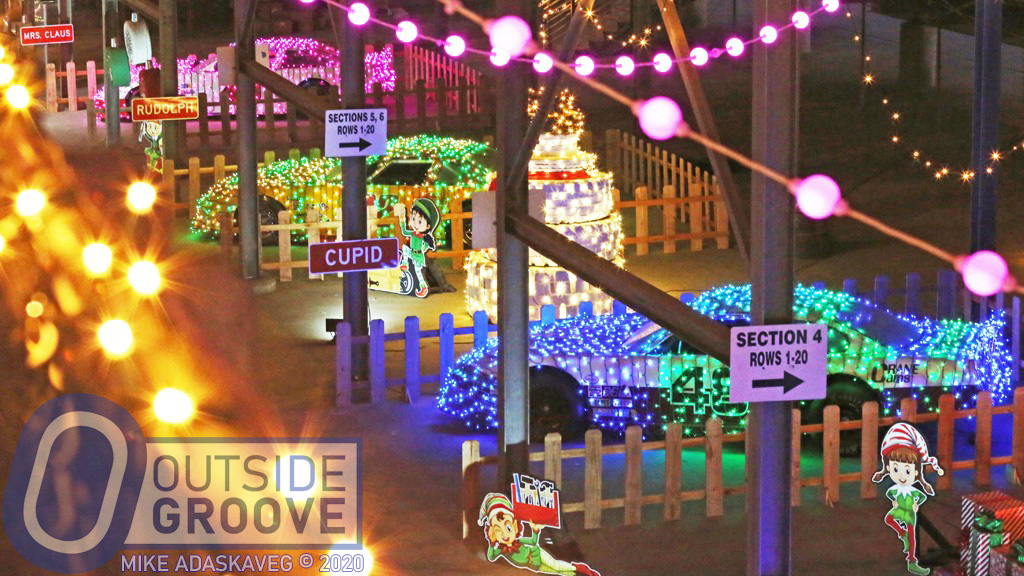 With a year of heavy restrictions due to the Covid-19 pandemic, California’s Irwindale Speedway explored other uses for their facility. That’s when “Santa’s Speedway Christmas Lights Drive-Thru” was born.

“There is more than one use for a speedway,” said Huddleton. “Our team started brainstorming. The first idea was turning the infield into a drive-in movie theater, showing Christmas movies. My wife, Lisa, wanted to decorate the speedway with lights.”

Huddleston called Mobile Illumination, a Northridge, California, company that produced holiday light shows for venues in the Los Angeles area, such as the LA Zoo and Universal Studios.

“All of [Mobile Illumination’s] shows were canceled because of Covid-19,” Huddleston said. “They had a lot of Christmas decorations and lighting, and we had a lot of space.”

Huddleston wanted to make Irwindale’s light show bigger than other speedway displays in the nation.

“We enlisted race car fabricators to build giant rings for lights, creating a 600-foot tunnel, 11-feet tall and 22-feet wide,” said Huddleston. “We built the world’s largest pixelated Christmas tree in our race car fab shop. It is 110-feet tall, with nine miles of lights strung up on it.”

Huddleston and the lighting company transformed the speedway in five weeks, opening during Thanksgiving week. The two-and-a-half-mile display, complete with choreographed music, takes approximately 45 minutes to an hour to drive through. A ticket for one car costs $59.

In a Covid-19 world with people looking for things to do outside their homes, the Santa’s Speedway Christmas Lights Drive-Thru did more than deliver. It not only generated revenue for the facility, but also garnered mainstream media attention in the Los Angeles area.

“It’s been sold out every day, from 5 p.m. to 9:30 p.m.,” Huddleston said. “There are 14 race cars built into the adventure. People who never knew the track was here or didn’t know much about stock car racing are being introduced to the sport every day.”