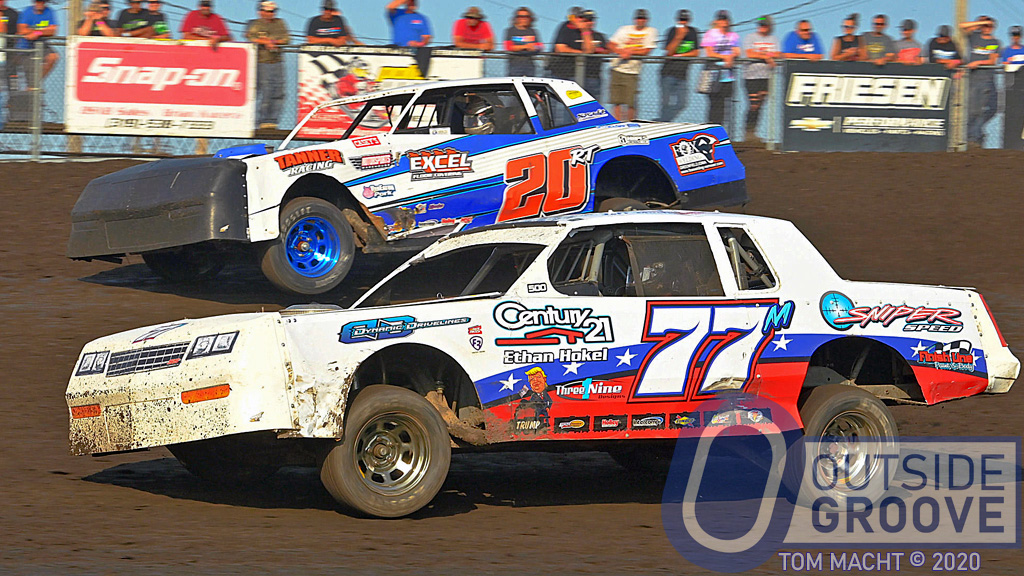 The journey to 100 career IMCA stock car wins started 18 years ago for Jeff Mueller (77M). Along the way, he’s battled many great drivers, including Ricky Thornton Jr. (20RT), shown here at Boone Speedway in Iowa. Mueller amassed 60 of his victories early in his career before moving into the modified class.

“I tried to make the transition to modifieds, but raising a family and racing a modified meant more work, more time, and more money,” Mueller, of Albion, Iowa, said. “After two years, I settled back into racing a stock car.”

Mueller started racking up wins in IMCA stock cars at a pair of eastern Iowa tracks — 34 Raceway in West Burlington and Pepsi Lee County Speedway in Donnellson. When his job as an underground utilities mapper moved him closer to central part of the Hawkeye State four years ago, he made Marshalltown Speedway his new home track.

“I had raced at Marshalltown Speedway a few times, and I knew that the track had the toughest competition in the country in the stock car division,” said Mueller. “[Track promoter] Toby Kruse has the surface prepared so well, there are multiple grooves. I’ve always driven better on the bottom, and Toby made the track competitive for drivers who prefer top, middle, or bottom.”

A total of 59 stock car drivers earned points at Marshalltown in 2020. The father-and-son duo of Dallon and Damon Murty accounted for six wins in the 10 events completed. Mueller earned two wins, with second being his 100th career victory. Getting there, however, required help from friends.

“We blew the engine at 141 Speedway in Wisconsin,” Mueller said. “I borrowed an engine from my carb guy, Cory Lemirande, to get through that weekend. When we got home, I borrowed another engine from Kyle Falck.”

The second borrowed engine propelled Mueller at Marshalltown to his 99th win. After the win, Mueller purchased a new 360-cid engine from Midstate Machine in Des Moines, Iowa. Win 100 came at Marshalltown on August 7.

Jeff Mueller did just that, taking six more features while traveling to various late-season events in 2020. He intends to continue adding wins to his tally, at least for now.

“I’ll keep going until [my daughter] Nessa and [son] Finn say they want to race,” Mueller said. “Then, the focus is on them, just as my dad did for me.”