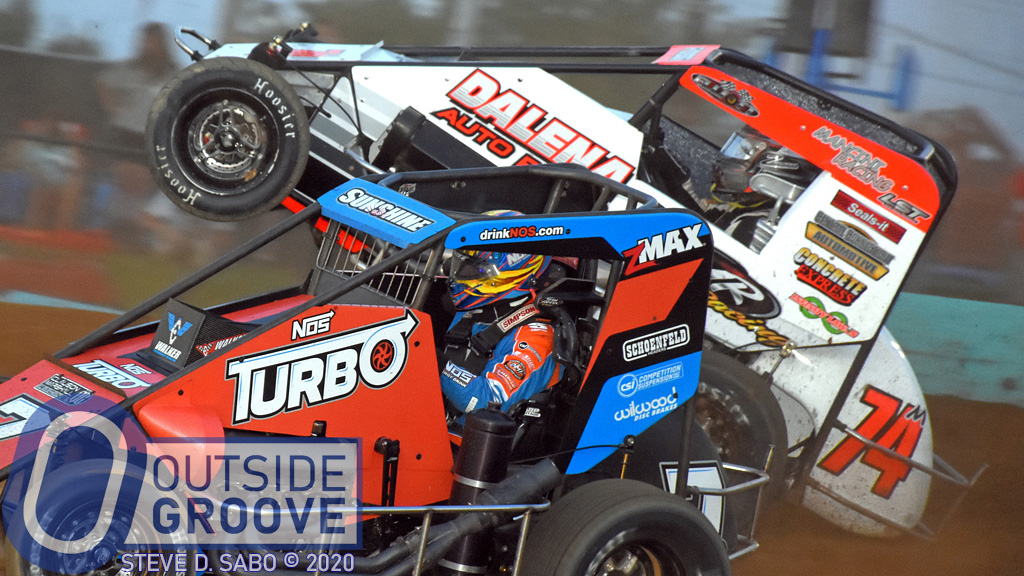 Adam Pierson traveled from East Corinth, Vermont, to Kutztown, Pennsylvania, to race the USAC Nos Energy Drink National Midget Series event on August 5 at Action Track USA. Unfortunately, a wreck that launched him (pictured in background) toward the fourth turn wall not only ended his night, but his midget season.

“Tyler Courtney [pictured in the foreground] performed a slide job on me when I was running the middle to top of the racetrack in fourth position [during the heat race],” Pierson said. “The slide job took place at the exit of turn four, past the apex, as opposed to going into the apex, which is more common. I didn’t expect it.”

A wheel hop between the two cars sent Pierson’s midget for a ride.

“My car went straight up and landed head-on into the wall,” Pierson said. “It bounced sideways and then flipped along the fence twice before landing on its side.”

Pierson exited the car without injury. He sat in a full-containment seat from The Joie of Seating and used a Simpson Hybrid head-and-neck restraint system and Simpson five-point harness. Pierson raced a car built by Spike Chassis and owned by J.R. Mancini, of Plainville, Connecticut. The accident destroyed the car.

“JR put a lot of work and money into the car,” said Pierson. “It was sad that this crash twisted and bent everything on the car badly. It could not be saved. Thank God for a well-built race car with the best safety equipment.”

Pierson intends to continue racing the sportsman modified in 2021. However, he has no plans lined up to race midgets again.