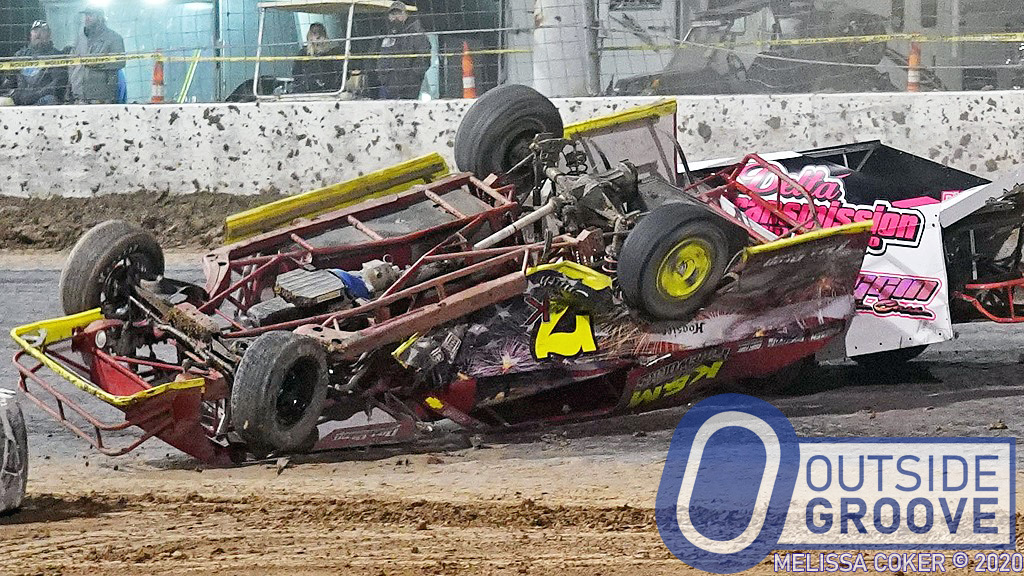 When the car of Antioch, California’s Buddy Kniss (background) spun, Kevin Smith took evasive action. Then, Smith went for a ride during the Duel in the Desert at The Dirt Track at Las Vegas Motor Speedway in Nevada. The incident occurred during an IMCA modified heat race on Thursday.

“The track was slick, and the car that spun was rolling down the track,” Smith, of Sedro-Woolley, Washington, said. “I turned to avoid him, my car slid, and the right front dug in.”

Despite the tough tumble that followed, Smith was not hurt. Smith sat in a Kirkey full-containment seat, with a Hooker Harness five-point harness. He wore a Simpson helmet, with a Simpson Hybrid Sport head-and-neck restraint.

“I wasn’t injured at all, but I was stuck hanging upside-down in the car,” said Smith. “I couldn’t release my [head-and-neck restraint] and get my helmet off.”

With assistance from the track crew, Smith swiftly exited the car.

“The track crew did everything right,” Smith said. “I appreciate that they were prepared for the situation of getting a driver with a [head-and-neck-restraint] out of a car quickly.”

“We worked until three o’clock in the morning using a Porto-Power and a welder to get everything back together for the Friday’s racing,” said Smith of the aftermath of the crash. “We came a long way and we wanted to race.”

Kevin Smith raced again on Friday, only to have his car’s right-front corner receive damage again in an on-track skirmish. He qualified for the Wild West Modified Tour season finale on Saturday, where he finished eighth. Smith also raced the Legends feature for veteran racers, where he placed eighth also.