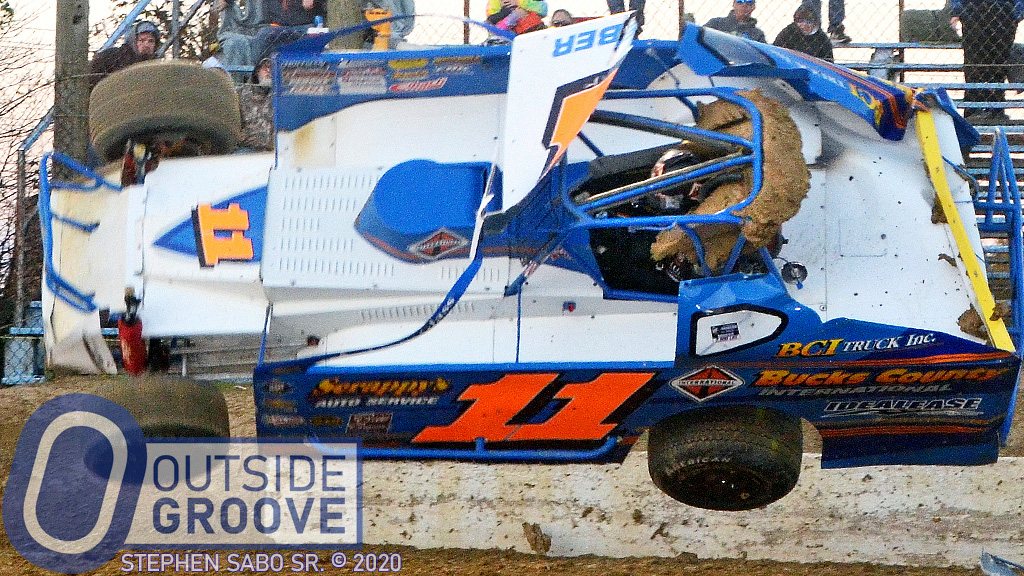 The modified raced by Danny Hieber dug into the track in a way that Hieber did not expect. The incident occurred during a Short Track Super Series heat race at Delaware’s Georgetown Speedway.

“I came off turn four for the checkered flag when I felt my right rear being hooked by another car,” Hieber, of Langhorne, Pennsylvania, said. “The car turned around and got into the wall at the flagger’s stand. I slid down the guardrail until I felt it dig into the first turn, which had been a little rough because of rain the day before.”

Hieber’s car then proceeded to flip.

“My car scooped up a couple yards of clay on that first impact,” said Hieber. “I had to push a couple feet of wet clay off of me in order to get out.”

The accident damaged much of his car, including the chassis from Troyer Race Cars.

“The front axle and rear end were still straight, but the car needed a front clip,” Hieber said. “We saved the engine.”

Hieber experienced a bruised calf and a sore lower back after the crash. He sat in a Kirkey full-containment seat, with a Simpson five-point harness. He used a knee pad under the steering column to protect his legs from hitting the column and themselves. One of his legs bent the knee pad during the flip. Hieber also wore a Simpson helmet, with a HANS device.

Danny Hieber said was ready to buy a new chassis from Bicknell Racing Products, which he intends to do during the off-season. The crash, unfortunately, marked the end to his 2020 rookie season in the Short Track Super Series.

Before loading up his wreck car at Georgetown, Hieber had visitors stop by his pit.

“The track crew did come to our car in the pits, shovels in hand, to get their clay back,” Hieber said.