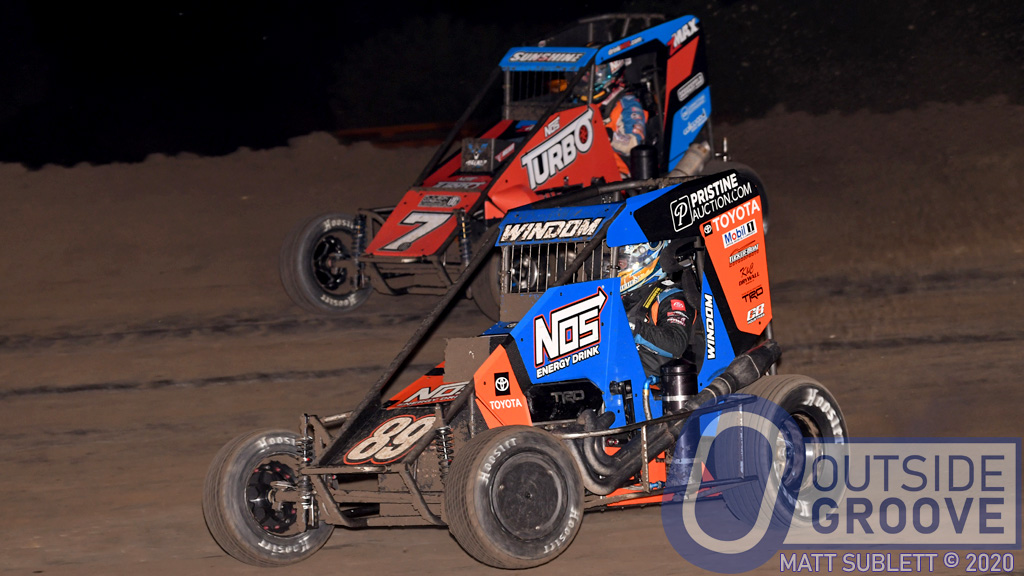 Chris Windom (foreground) battled Tyler Courtney (background) for the championship throughout the season of the USAC Nos Energy Drink National Midget Series. The title came down to one race, one controversial final-lap move, and one point at the last event that awarded points by position at Bakersfield Speedway in California on November 17.

At Bakersfield, Windom entered the event nine points ahead of Courtney.

“We kept track of the point spread [between Courtney and I] all night,” Windom, of Canton, Illinois, said. “When it came to the feature, I knew I had to finish no more than three spots behind Tyler to win the championship.”

When Courtney moved up to third late in the feature, Windom saw he had to take home a sixth-place finish or better to earn the championship.

“Winning the championship is all I could think about — it was the end of the season in a few laps,” said Windom. “Ricky Stenhouse and I were throwing each other slide jobs all over the track for three or four laps. Then, on the white-flag lap, Ricky crossed over me going into the third turn. He went to the bottom to protect his position. I went lower and got into the back of him. He spun out.”

Opinions were split of the move Windom made.

“People said I had to crash a guy to win the championship.” Windom said. “Others said I did what I had to do. I worked hard all year to get the championship. I just raced hard. I saw the position and went for it. It was a split-second decision.”

Since the season finale at California’s Merced Speedway awarded appearance points only, Chris Windom showed up and claimed the USAC Nos Energy Drink National Midget Series title. By doing so, it resulted him in claiming the prestigious USAC Triple Crown.

The USAC Triple Crown is when a driver earns a title in each of USAC’s three top divisions — Silver Crown, sprint cars, and midgets. Windom won the Silver Crown championship in 2016 and the sprint car one in 2017. He becomes only the seventh driver to achieve a Triple Crown, a list of racers that includes Pancho Carter, Tony Stewart, Dave Darland, J.J. Yeley, Jerry Coons Jr., and Tracy Hines.