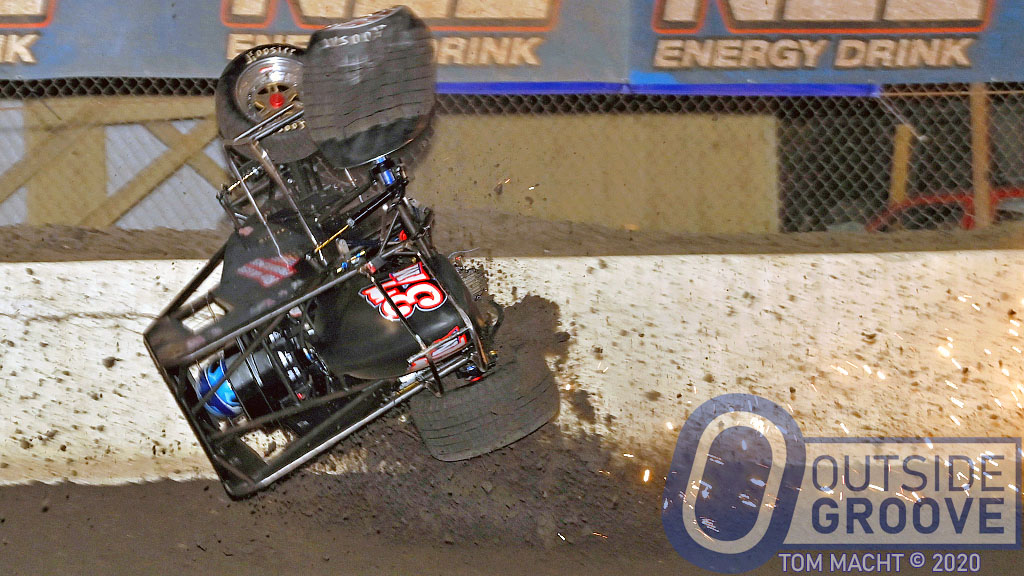 It was only her second time in a midget for Ashlyn Rodriguez when she turned it over on Tuesday. The incident occurred during qualifying for USAC Nos Energy Drink National Midget Series/Western States Midget Series race at Bakersfield Speedway in California.

Most of Rodriguez’s experience comes behind the wheel of winged cars — 600s and 360 sprint cars. The high school junior learned the effects of racing without the wings the hard way at Bakersfield.

“It was my fault that I crashed,” Rodriguez, of Elk Grove, California, said. “I drove the car into the turn too hard. For a moment I thought I was driving a winged car. There was no downforce to hold the car on the track. It slid up on me, tapped the wall, and went over.”

Rodriguez was not seriously hurt in the flip. Sponsored by Simpson, she used their belts and HANS device, among other personal safety gear. Rodriguez sat in a ButlerBuilt seat, with inserts custom-made to her body by Sharp Advantage Safety Products.

“I was a little sore and had a few bruises,” said Rodriguez of her injuries. “My parents stressed the importance of safety ever since I began racing.”

Her father, Johnny Rodriguez, raced sprints cars and midgets before devoting his time to Rodriguez’s racing efforts. Rodriguez’s ride in a midget came from a car owner her father once drove for, Nick Mitchell.

“I had watched the USAC midgets for the first time a year earlier,” Rodriguez said. “My goals were always centered around winged sprint cars. After seeing the USAC midgets in-person, I immediately took interest because the racing was so competitive.”

Ashlyn Rodriguez embarked on her rookie season in winged 360 sprint cars this year. With the Covid-19 pandemic raging, most shows brought in the heavy hitters of open wheel racing who were hungry to race.

“This season there were no everyday weekly shows for sprint cars or midgets,” Rodriguez said. “There were sometimes 50 or more cars trying to qualify for the feature. When we made the main, it was like a win for us because there was so much competition.”