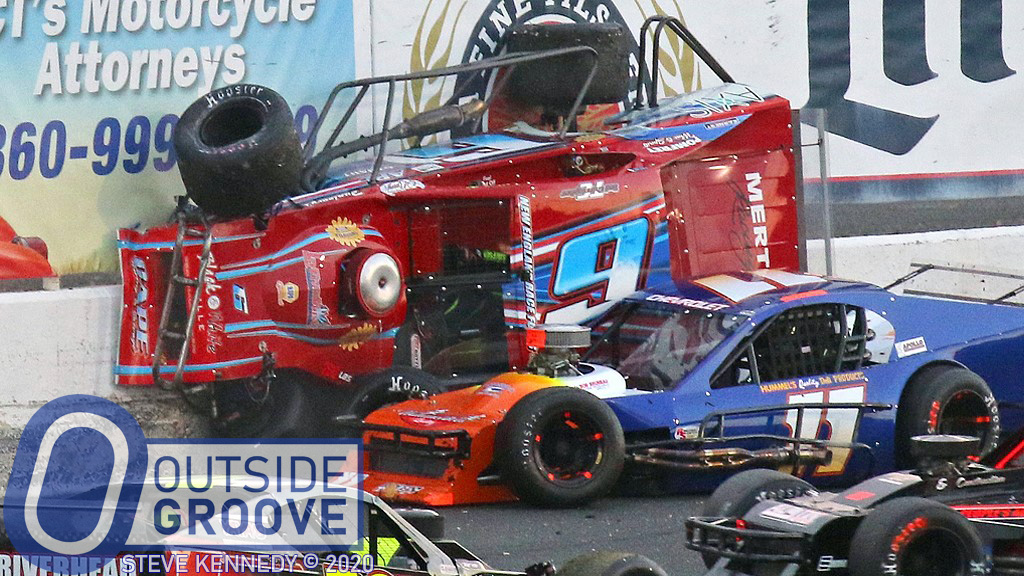 “Coby didn’t seem to get up to speed and the outside groove stacked up,” Pitkat, of Bellingham, Massachusetts, said. “I tried to square up on the car in front of me so I wouldn’t rip a wheel off of my car. Eric Goodale checked up harder than I expected. I got into his back end a bit, and then I was hit from the side on the left rear, which ran my car up into the wall.”

Pitkat found himself in a precarious situation for two reasons.

“First, I thought I was going over the wall,” said Pitkat. “Then, I realized I wasn’t, but I was pinned to the wall, driver’s-side-down, with fuel running out of the carburetor. All I could think was that anything could happen, so my first instinct was to get the hell out of the car.”

Pitkat thought of his wife, Erica, and their children, Ella, Weston, and Bryce, who sat in the stands, watching the race.

“As soon as I got out of the passenger’s side, I sat on the door, and gathered my thoughts,” Pitkat said. “That’s when I shut the power and the fuel switches off.”

Woody Pitkat emerged from the wreck without injury. He sat in a full-containment seat from The Joie of Seating, with a Schroth six-point harness, with a camlock. He wore a Impact helmet, with a HANS device, and Simpson fire suit, gloves, and shoes.

“Drivers were trying to gain spots, coming out of the corner full tilt when the caution was out — maybe their spotters didn’t warn them,” said Pitkat of the restart. “Drivers were just not looking ahead of them.”