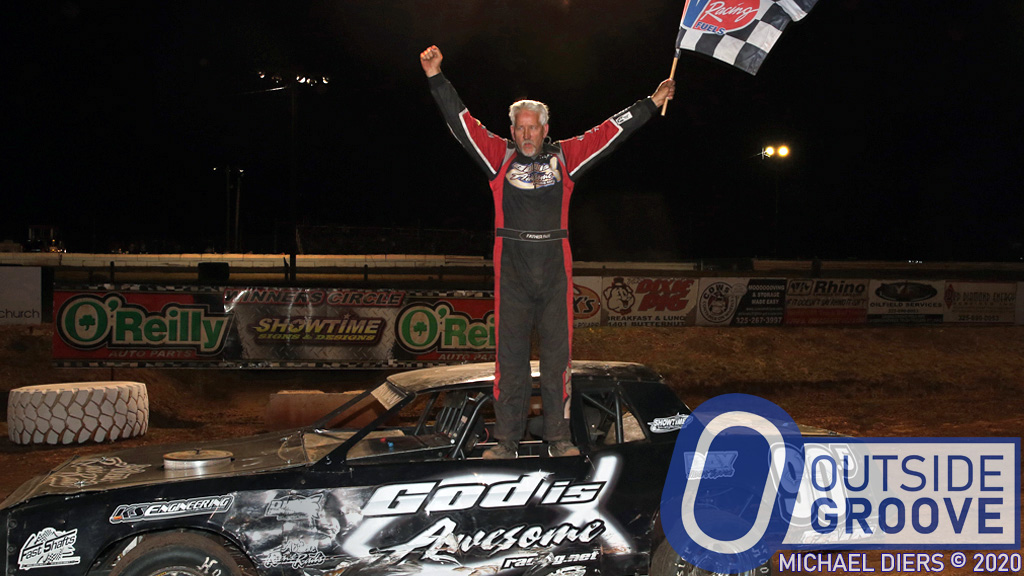 “The stock car takes considerably less time to maintain than the modified,” Fain, 54, of Abilene, Texas, said. “I cut back my racing for more family time — I’ve got a four-year-old granddaughter and a thriving business.”

Fain owns Abilene Race Rads, which, among many other things cooling-system-related, manufactures the Super Sucker brand of four-blade fans. While his business certainly means a lot to Fain, he places a message of greater importance to him large on his car — “God is Awesome” — which is part of GodisAwesomeRacing.net, the website for his team.

“Yes, God is awesome,” said Fain. “When I started in racing, I felt like racing should be my ministry. I’m not a vocal, in-your-face type of guy. What I have on the side of my car is one way to strike up a conversation with people about God. It is one way I can be a witness to God.”

Fain gives credit to God in times of success, even if that means emerging unscathed from trouble.

“God protects me when I am racing,” Fain said. “I walked away from two bad flips in my career.”

The message Fain carries on his stock car resonates with those who see it at the races.

“People complement me for showing my faith at the racetrack,” said Fain.

Tommy Fain plans to start the 2021 season in Arizona. You can count on seeing the “God is Awesome” message on his car then.

“Racers ask me if they can use my slogan on their cars,” Fain said. “I tell them I don’t have the rights to God. Everyone has the right to God.”