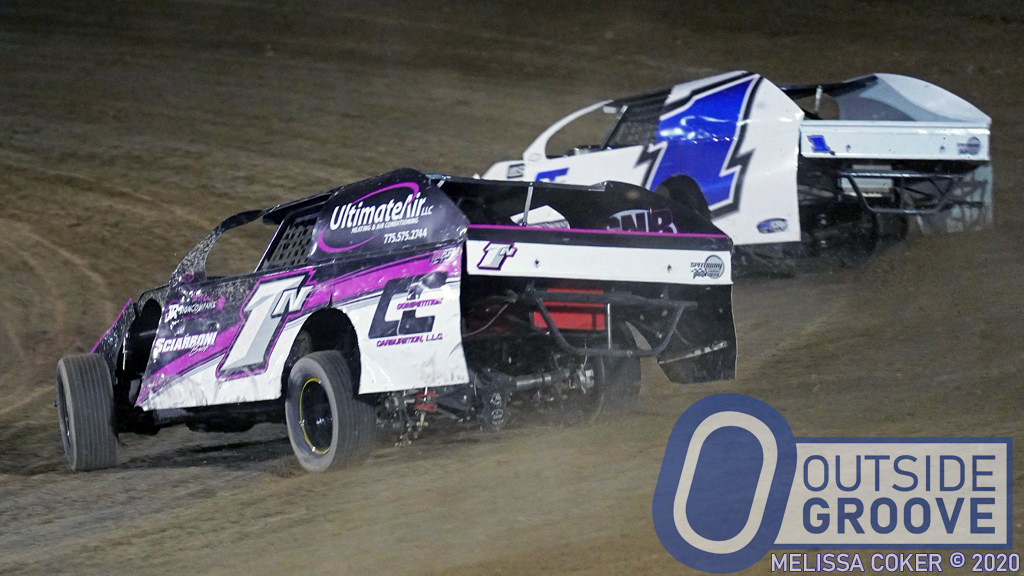 The Natenstedts, Shawn (pictured on the outside) and Missy (inside), have raced each other in the IMCA modified division for eight years. The married couple with two daughters enjoys racing together, despite different approaches to driving.

“Our differences start with driving style,” Shawn, of Fernley, Nevada, said. “I’m aggressive getting into the turns, and I drive it sideways. She drives in straight and turns the corner like an asphalt driver. She always has control of her car no matter what. I’m on the verge of out of control.”

Despite their contrasting styles, both find success.

“He tells me to be more aggressive and to use two feet when I drive,” said Missy. “But, I have beaten him to the finish line. The last time was at Fernley 95A Speedway. He got by me when I hit a rut, and then a lap later he hit the same rut and I drove right by him.”

Missy introduced Shawn to the sport for the first time in 1998.

“It was love at first sight — a beautiful girl took me to the stock car races,” Shawn said. “As soon as I saw how exciting the races were and how much she enjoyed racing, I went right out and bought a car.”

While Shawn raced he encouraged Missy to get behind the wheel, too. Missy started out in a stock class before joining her husband in the modifieds.

“We’ve never really crashed into each other,” said Missy. “He’s moved me out of the way. I wasn’t mad, but some women said I should kick his butt. We got a good laugh over the incident. I feel racing should be fun — if it isn’t, we shouldn’t be in it. We’re lucky to be racing together.”

The Natenstedts share the joy of each other’s on-track successes.

“I get more of a sense of accomplishment when she does well than when I do well,” Shawn said.