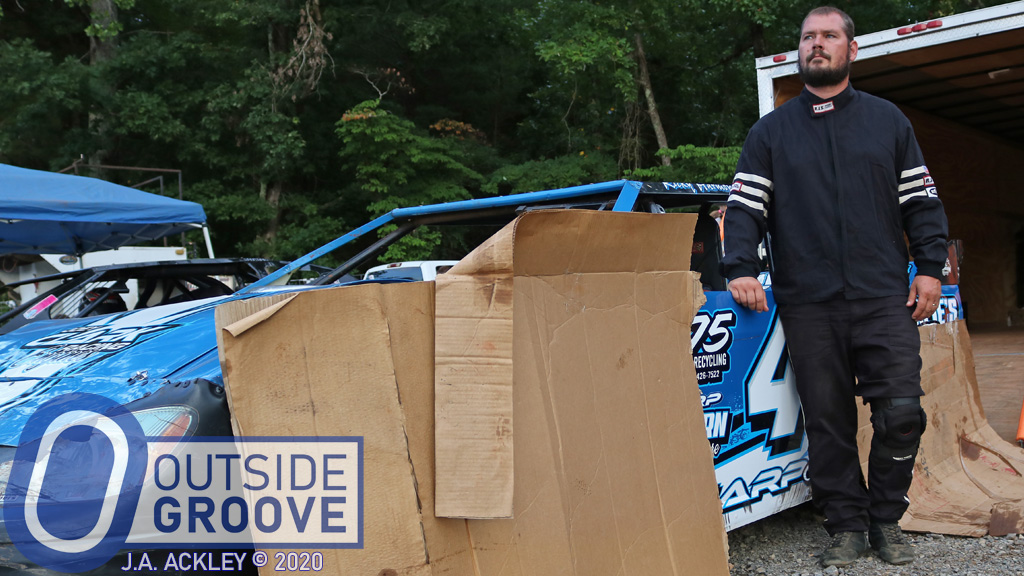 Rick Harmon and Rick Hendrick share a few things in common. Both monogram items with “R.H.” Both own multi-car teams. Both can call themselves champions. The only striking difference between the two may be their net worth. Harmon doesn’t let that stop him, though. He found a way to earn the 4-cylinder championship this year at Mountain View Raceway in Spring City, Tennessee.

For example, Harmon saved a few pennies by using recycled materials from a renewable resource to protect his tires.

“It’s just a poor man’s way of covering the tires to keep the sun off them,” said Harmon of his homemade solution. “That’s what we had on hand, so that’s what we used. It works.”

Harmon needs to make every cent count on his team. The 42-year-old from Evensville, Tennessee, fields three cars. One for himself. Another for his 15-year-old son, Joey, who embarked on his first full season this year. And, one more that serves as a backup and for research-and-development purposes, driven by friend Michael Fitzgerald.

Away from the track, Harmon has six children — ranging in age from 21 to three — with his wife of 22 years, Lynn. He supports the household with his job as lead driver for La-Z-Boy, overseeing inbound and outbound loads.

“I don’t take anything for racing out of my check from La-Z-Boy — that goes to my family,” Harmon said. “If we’re able to make enough [elsewhere] to go racing, we go racing.”

For the racing operation, Harmon and his son, Joey, work odd jobs to pay for it.

“We do pretty much anything we can get our hands on,” said Harmon. “Work on people’s cars. We do lawn service, hedges, leaves, that kind of stuff. Buy stuff, sell stuff.”

The road to the 2020 points championship, where Harmon; his son, Joey; and Fitzgerald finished one-two-three in points, respectfully, did not come easy.

“We worked hard the last two years to run full-time,” said Harmon. “We done these odd jobs seven days a week. Every day after work, we’ll do these jobs until dark.”

As Hendrick had his father, “Papa” Joe Hendrick, guiding him with advice, Harmon had his father, Rick A. Harmon. The elder Harmon passed away unexpectedly last November.

“They diagnosed him with stage IV cancer and less than two weeks later he was gone,” Harmon said. “It took the whole family and it turned it upside-down.”

Harmon now takes care of his mother in addition to his wife and six children.

“We had thoughts of giving up, once [my father] passed away,” said Harmon. “We then thought he wouldn’t want us to. We’re going for this [championship] — and we’re going to go hard. We never let up, and we won it.”

Looking back at the past year, Rick Harmon understandably takes great satisfaction in his championship.