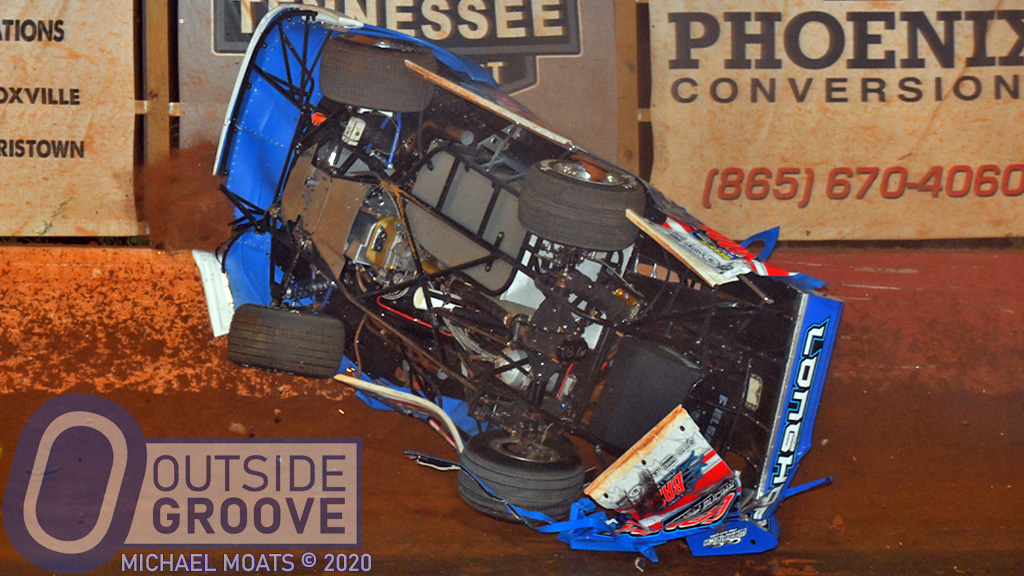 Derek Ellis took a bad tumble in the Southern All Stars B-main at Smoky Mountain Speedway in Maryville, Tennessee. The incident occurred during the Saturday portion of the two-day King of the Mountain Championship Weekend season finale at the high-banked, 4/10-mile clay oval.

“We went green and it looked like something broke on the number 66 car [driven by outside pole-sitter Jake Knowles] in front of me,” Ellis, of Chatsworth, Georgia, said. “I had nowhere to go. My car’s right-rear wheel caught him in the rear, and I flipped one hard flip.”

Knowles, of Rome, Georgia, confirmed Ellis’ assessment, saying via Twitter “something broke on the right front” of his car, which caused heavy damage to his late model. Both Knowles and Ellis did not continue to the feature, which was won by another driver from Georgia, Dale McDowell.

“It was only my second time out this year in my older super late model,” said Ellis. “The wreck looked pretty bad, but it was all cosmetic as far as I can tell. We will be checking the chassis closely.”

Ellis works as an underground utilities specialist for his own company, Ellis Contracting. He races two Longhorn Chassis super late models, both with power plants from Clements Racing Engines. Ellis sat in a full-containment seat from The Joie of Seating, with a five-point harness from Crow Enterprizes. He wore a Bell helmet paired with a HANS device.

“That was a hard lick — really hard — but I had no soreness whatsoever,” Ellis said. “My safety equipment worked well in protecting me.”

Derek Ellis has raced since 1998. He first started steering super late models in 2002.

“This year was a strange year, to say the least,” said Ellis. “We didn’t get out to race nearly as much as we would have wanted to with so many postponements and cancellations. We can only hope for the best for next year.”