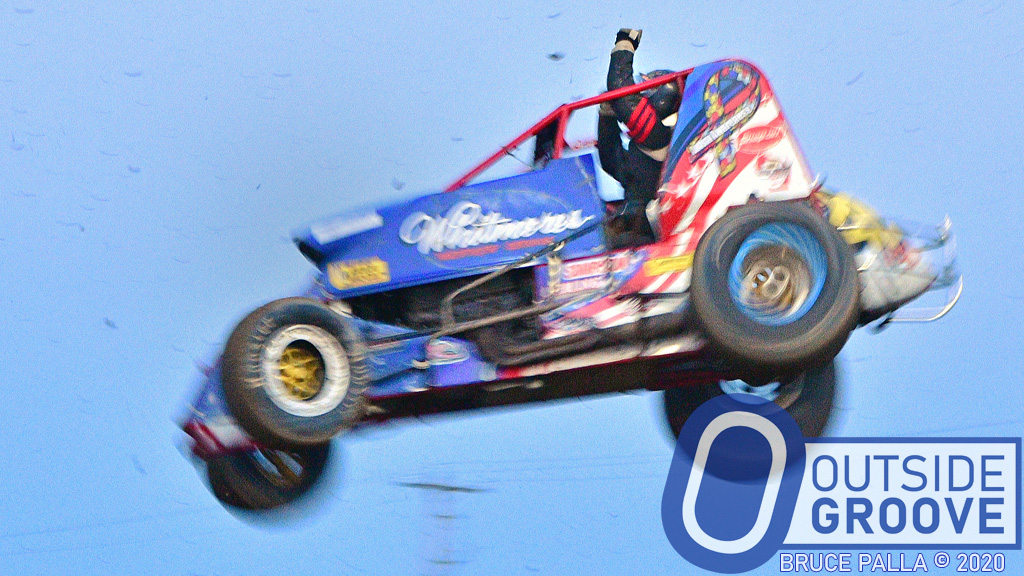 Tom Eller took the flight of his career at Wilmot Raceway in Wisconsin. It occurred during a heat race for the Wisconsin Wingless Sprint Series portion of the show. Another car drifted into Eller going into turn one, launching Eller skyward.

“I was running the outside groove, wide-open, and burying the cushion at the end of the frontstretch,” said Eller, 36, of Pleasant Prairie, Wisconsin. “[The other driver] planted his right rear into my left rear. I knew what was coming — the faster sprint car is usually the one that’s going for the ride when that happens.”

Eller’s car flipped three times, end over end. The sprint car landed on its nose and then fell back upside-down.

“I blacked out after the first flip,” Eller said. “When I woke up, the engine was running wide-open. I use a floor-mounted throttle, and the floor pan bent on the first flip, opening the throttle. Luckily, the driveshaft fell out. Unlucky for me, it stayed in the car and did a number on my right leg, which is now purple from ankle to knee.”

Eller sat in a ButlerBuilt full-containment seat, with an Impact five-point harness. He wore a Simpson helmet and a NecksGen Rev2 head-and-neck restraint system. However, Eller did not use arm restraints. He caught flak from 2015 Bumper to Bumper IRA Outlaw Sprint Series champion Bill Rose.

“[Rose] got on me pretty heavy for not having [arm restraints] and made me promise to wear them,” said Eller. “I was lucky that my arms didn’t break. When I was unconscious [during the flips], they were flapping outside the car. They even hit the cage and steering wheel a few times.”

In the photo, Eller’s head rises above the roll cage. The car he uses has a standard roll cage from Maxim Racing. He said his head is typically two inches below the top of the cage. He felt that with his weight at nearly 300 lb., the force of the incident stretched the belts, allowing him to move that far.

Tom Eller hopes to return to Wilmot this Saturday, racing one of his old sprint cars.

“My only concern is how sore my shoulders are,” Eller said. “If I can’t tighten my belts, I’ll park it for the night.”

Outside Groove Note of Transparency: Corrected Tom Eller’s hometown (2020-09-10). Added information about why the driver felt his head extended beyond the roll cage in the photo (2020-09-10).