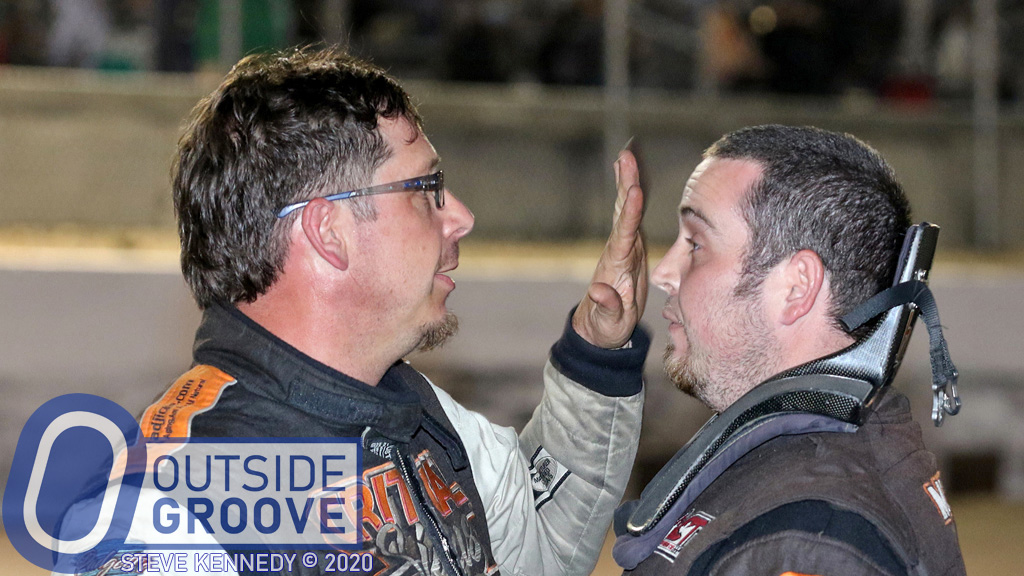 Ryan Morgan (right) confronted Shawn Monahan (left) in victory lane after Morgan felt Monahan did not race him cleanly. The incident occurred after the sportsman feature concluded at the New London-Waterford Speedbowl in Connecticut on September 5.

“I just wanted him to back away,” Monahan, 42, of Waterford, Connecticut, said. “So, I put on a show — waving the flag right at him. Remember, this is show business.”

Morgan was close to winning his first race in two years of trying. He wanted to let Monahan know his displeasure.

“Ryan kept coming at me and chest-bumped me, pushing me back, right in victory lane,” said Monahan. “So, I put my hand up. I was thinking, ‘Where’s his mask?’ Our faces were just inches apart.”

Morgan did not appreciate Monahan’s methods of reaching the top spot.

“I did my best to give Ryan Morgan some racing room,” Monahan said. “But every time my car comes close to his, and just touches, he goes off the deep end. I guess I don’t feel the way he does about close racing.”

When tempers cooled, Morgan, in his sophomore season as a sportsman driver, reflected on the incident.

“I choose not to comment and go forward,” said Morgan, 26, of North Franklin, Connecticut. “Shawn and I don’t get along when we are inside race cars, but outside of our cars, it’s a different story.”

Shawn Monahan also put the incident behind him.

“I didn’t feel the way he did about the race,” Monahan said. “This could have easily gone in the wrong direction. Yes, I drove into him, but only when [fellow competitor] Ryan Waterman was shoving me from behind.”

“I can easily separate what happens on the racetrack from my personal life,” said Monahan. “The racing world is small enough — we can still talk to each other in the pits.”