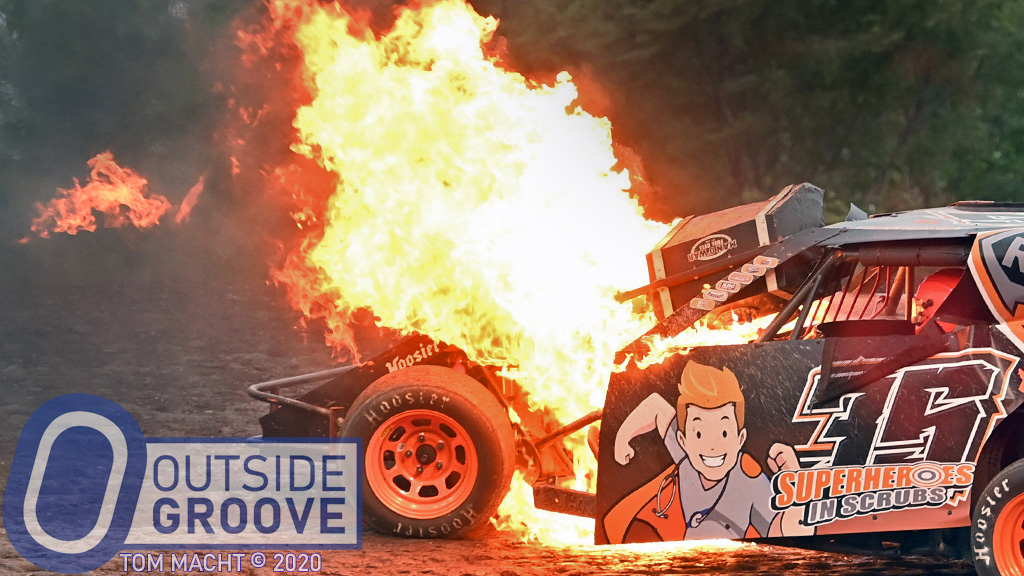 Chance Huston faced a wall of fire in the blink of an eye. The fuel cell of another car, driven by Jeremiah Reed, broke free. It dragged under Reed’s car for a few seconds, bounced on the track, and then landed in Huston’s windshield opening. The incident occurred during the C feature for Northern SportMods at the IMCA Speedway Motors Super Nationals at Boone Speedway in Iowa.

Miraculously, no one was injured because of the incident.

“Jeremiah’s sport mod was two cars ahead of me,” said Huston, 31, of East Moline, Illinois. “I saw the car in front of me shooting to the bottom of the track. That car was blocking my view. He was taking evasive action. Next, I saw a fuel cell bounce from the track and land in my windshield.”

Time then slowed down for Huston.

“It was a scary situation to see a fuel cell land right in front of your face,” Huston said. “I had no time to react. I smelled fuel in the first second. Then, I saw it flow from the cell — that was two seconds. The third second was an explosion of flames.”

“They ran from the infield, with fire extinguishers aimed at the fire,” said Huston. “One safety crew person released me from the car while another put his hands under my arms and yanked me out of the car. All of this happened in about 10 seconds.”

With the quick actions of the safety crew, Huston didn’t have to put his safety equipment to the test. Huston wore a three-layer CKS fire suit from Illini Racing Supply in Decatur, Illinois, Velocita gloves and shoes, and a Simpson helmet.

After the track crew returned Huston’s car to his pit, other pit crews rushed to help. With their assistance, Huston made it back out on the track in time for the Race of Champions qualifying event.

“There was no contact on the racetrack between another car and mine,” said Reed, 27, of Otho, Iowa. “A couple laps earlier, I ran over an infield tire that was concreted. The car bounced up and the back end slammed down, with the fuel cell landing on the tire. I did not realize that it would break the welds.”

The fuel cell straps remained attached to the bars that held it. The bars themselves broke free of the chassis.

Reed purchased his 2014 sport mod used last season, which was his rookie year. He had no idea who welded the bars to mount his Jaz Products Man O’ War fuel cell to the chassis. The fuel cell itself includes built-in safety features to prevent fuel from escaping in a rollover.

“The cell has a rollover vent fitting and a rollover flapper valve on the main filler,” Brad Jewett, of Jaz Products, said. “Shutoff valves would have to be on the external lines attached to the fittings of the cell, if the racer chooses to do so. There are no one-way fuel line fittings at the cell.”

Jeremiah Reed felt embarrassed about the incident with Chance Huston.

“I had the certified welder at the track repair my car and correctly weld the bars that the straps were mounted on,” Reed said. “Regardless of what caused the welds to break, it is unacceptable that they broke in the first place. We feel terrible that another car was damaged as the result of this, but we are glad and fortunate that no other drivers were injured.”