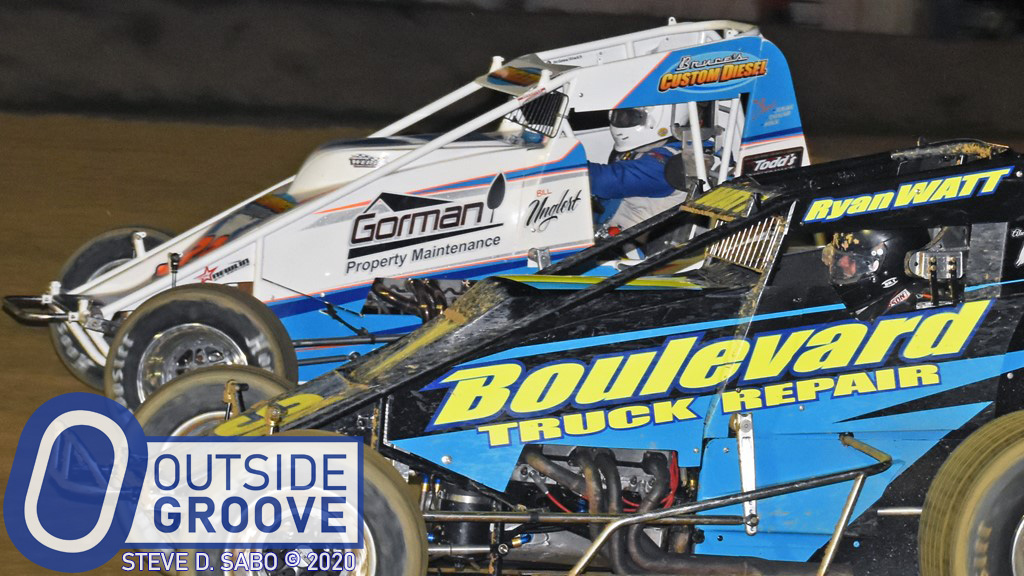 If you have ever wondered how much fun a driver has steering a race car, take a look at Ryan Watt (foreground). Watt beamed with joy in his first time racing a wingless sprint car. You could see that megawatt smile as he made the winning pass on Bill Unglert (background) during the USAC East Coast Sprint Cars feature at Delaware’s Georgetown Speedway.

Tim and Franny Hogue gave Watt, an accomplished modified driver, a chance to wheel their sprint car. The three-time Short Track Super Series champion jumped at the opportunity. However, his inexperience behind the wheel of the notoriously twitchy cars showed during hot laps.

“I went over the banking twice in hot laps,” Watt, of Boyertown, Pennsylvania, said. “The track was yet to come in and I was trying to learn to drive a wingless sprint car as fast as I could.”

Watt had to master the differences of a wingless sprint car compared to a modified.

“There is a lot of power to weight in sprint cars,” said Watt. “You have to use the throttle to get through the turns.”

Modifieds and sprint cars also have similarities, according to Watt.

Ryan Watt used a slide job to pass Unglert, of Old Bridge, New Jersey, for the lead and then went on to win his first wingless sprint car feature.