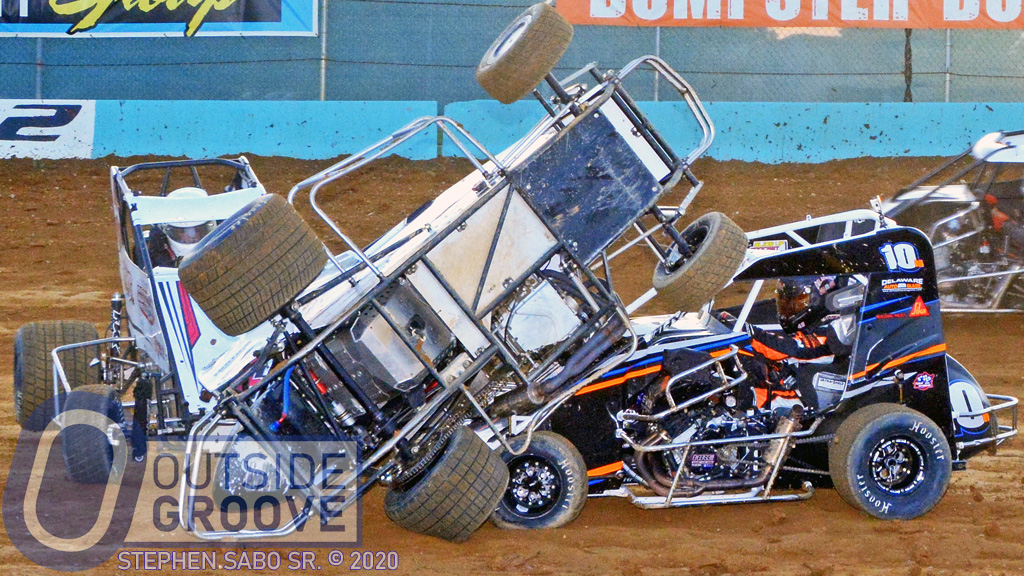 Eddie Strada took a wild tumble during the C-main for the 600s at Action Track USA in Kutztown, Pennsylvania.

“Only the top two would transfer from the C-main, and I was right behind the leader after a green-white-checkered restart,” said Strada, from Lake Arrow, Pennsylvania. “That’s when a car blasted me from behind.”

Strada’s car landed upside-down. However, the incident did not injure him. Strada was strapped into a Kirkey full-containment seat, with a Simpson five-point harness and an Arai helmet. The track crew flipped Strada’s car over and he fired it up and kept going. Strada restarted at the tail of the field, with slim hope of moving back into the top two positions for the transfer. He was forced to use a provisional to start in the 26-car feature.

“We had some engine issues, a bent shock, and a bent frame tube,” Strada said. “It was hard for me to get up through the pack.”

Strada finished 18th in the feature on the 1/5-mile progressively-banked track he calls his Wednesday-night home. Alex Bright, of Collegeville, Pennsylvania, was the best among the 56 entrties on hand that evening, winning the 600 feature.

On Friday nights, Eddie Strada moves behind the wheel of a modified at Big Diamond Speedway in Pottsville, Pennsylvania. At that track he sees some of the same faces he does at Action Track USA, such as Billy Pauch Jr. and Tim Buckwalter. However, both venues offer their own groups of top-notch talent.

“At Action Track USA, the kids coming up through the ranks are getting better. It’s hard to win a feature, let alone qualify — but, that’s why we race there.”