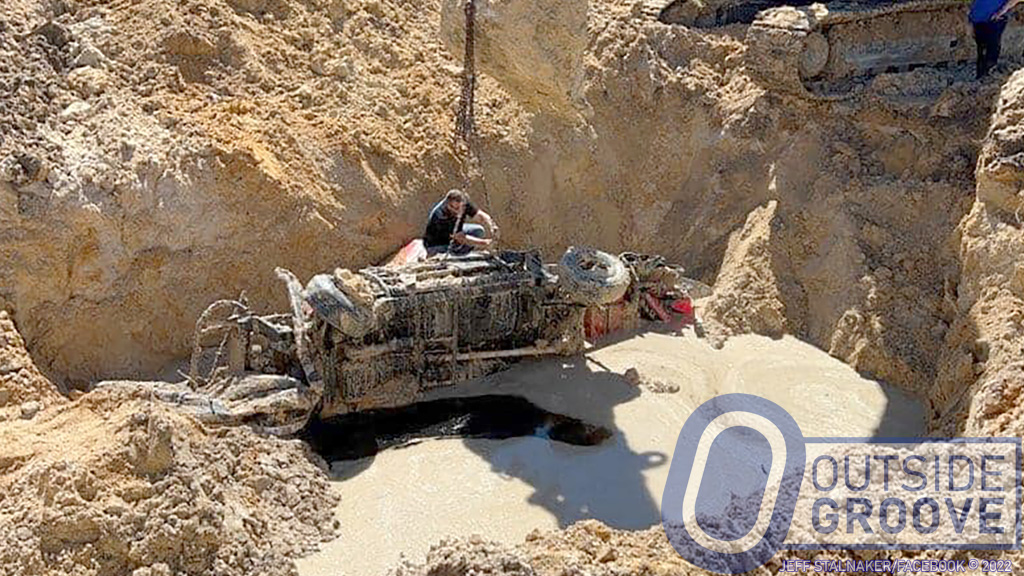 Unfortunately, there’s a bittersweet ending to the recovery of the trailer that held two race cars owned by Jeff Stalnaker Jr. Yes, the stolen items have been recovered and the suspect is in custody, but the cars and some equipment have been significantly damaged after being buried in a pit. (See “Jeff Stalnaker: Reward Offered for Stolen Trailer”.)

The police have arrested Alex Sloane Herring in connection with the theft of the trailer, its contents and related crimes. He has a previous conviction for grand theft auto on September 10, 2021. Herring was released on probation on March 2, 2022. According to Stalnaker, he has a history of trailer theft.

In many instances when thieves steal trailers, they look for the items they can easily resell on the market, such as tools and other household equipment. However, the general populous has very little interest in race cars and racing-related items. Upon discovery of racing goods, many thieves will either discard them in the woods, in deep water, or even burn them.

Allegedly, Herring did something atypical. He took an excavator, dug a hole, and buried two race cars and related racing equipment. In the process of doing so, he significantly damaged the aforementioned items.

“Both cars were stacked up on each other — they’re mangled and destroyed,” said Stalnaker. “The motors, they got to go back [to the engine builder], because they were submerged in water for three days. A lot of the wheels and tires are bent. The whole cage is trashed. There’s not a whole lot salvageable.”

Herring was booked by the Marion County Sheriff’s Office and is in custody without the possibility of making bond for release due to being on probation. He has nine charges currently — three counts of grand theft auto, two counts of criminal mischief, one count of tampering with evidence, one count of carrying a concealed firearm without a license, one count of resisting arrest without violence, and one count of violation of parole. His next court date is November 1, 2022.

If there’s a silver lining to this story, Jeff Stalnaker said it’s been the outpouring of support for him.

“My gosh, I’ve gotten a thousand messages from people trying to help out,” Stalnaker, of Ocala, Florida, said. “It’s been a very humbling experience. Even some of your toughest competitors on the racetrack, which you typically don’t see eye to eye, they’re reaching out. Guys you never talked to, offering cars, offering parts. The response that has come from all this has been incredible.”

Jeff Stalnaker Jr. said his future plans for racing are currently up in the air. However, the one thing that’s certain. The racing community steps up when one of their own encounters a problem.

Outside Groove Note of Transparency: Additional details of the arrest added (2022-10-04).