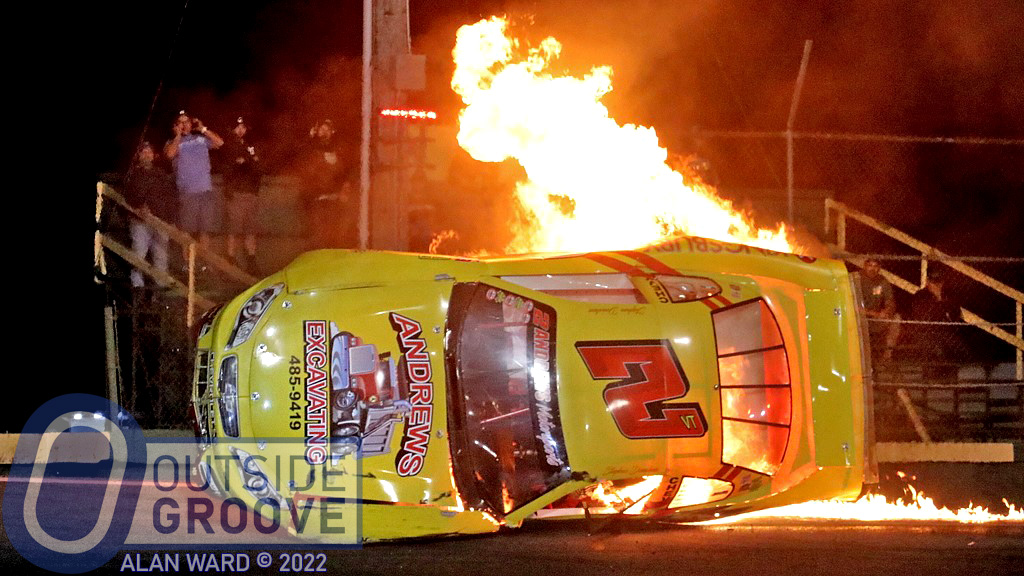 What a weekend Stephen Donahue had. On Friday, he endured a bad crash and an ensuing fire off the final corner on the final lap to eventually win the feature. After a trip to the hospital for a broken wrist and minor burns, he returned to action the next night to win a 125-lapper and a track title.

Stephen Donahue started the weekend at Thunder Road in Barre, Vermont. Coming to the checkers, he and Chris Roberts collided.

That was just the beginning of the chain of events.

“When my car reached a section of wall the track added to protect the first turn, it rolled onto its roof,” said Donahue. “The fire went way up into the sky. It was really burning hot.”

Without realizing he had a broken wrist, Donahue quickly exited his burning car.

“I pulled the steering wheel off, unbuckled my belts, put my feet on the roof roll bar, and slid head-first on the driver’s side,” Donahue said. “I was surrounded by flames. The track safety crew arrived [and] sprayed extinguishers on the fire as I came out of the car.”

Immediate Aftermath of the Inferno

“The gloves, the suit, the helmet — they all burned,” said Donahue. “The HANS melted. My left hand was burned.”

Soon after exiting the car, Donahue realized he was hurt.

“I noticed my suit had melted and I had a burn on my hand,” Donahue said. “Then, I felt pain in my wrist. At first, I did not want to go to the hospital. I sat in the ambulance for a few minutes, and noticed my wrist swelling and the pain was increasing. I finally agreed with the paramedics.”

A Trip to the Hospital

While Roberts crossed the finish line first, the track penalized Roberts for the contact. Donahue received that news while under the care of the staff at Central Vermont Medical Center.

“I got a call in the emergency room, and I was told I won the feature,” said Donahue. “That eased the pain a bit.”

Before the doctors released him from the hospital, they told Donahue to keep his hand in a splint and meet with a surgeon on Tuesday. That did not discourage him from heading to New Hampshire just a few hours later. He arranged to drive a car owned by his uncle, Bill Donahue.

Stephen Donahue was determined to make the points-season-ending race at Riverside Speedway in Groveton, New Hampshire.

“It was championship night, and I was in contention for the track championship,” Donahue said. “The race was 125 laps instead of our usual 75 laps. I just took some Tylenol and went racing.”

Donahue started the feature ninth, and had his work cut out for him for the long race.

“I knew I had to get up front as fast as I could because of my broken wrist,” Donahue said.

Donahue needed to rest his right hand more than once over the course of the 125-lapper.

“When I was racing, I didn’t feel the pain,” said Donahue. “But under yellow, it sure did hurt. Under yellow, I drove one-handed and put my right hand up in the air, resting on the bars.”

The faster Donahue went, the pain seemed to subside, which provided him with the motivation to storm to the front and win the feature and late model championship.

“Norm [Andrews, of Andrews Motorsports] called and said the chassis survived and would be okay to race again,” Donahue said of the 2014 Crazy Horse Racing chassis. “He said the right-front suspension has to be replaced and the rear end has to be gone through. It will need a new body and fuel cell. It will be a full winter rebuild.”

Donahue said they felt like they determined the cause of the fire, too.

“We think that fuel spilled out the vent tube when the car was riding the wall on its side,” said Donahue. “The flap that is supposed to shut off fuel flow didn’t shut it off because the car was on its side.”

The rest of the season remains uncertain for Stephen Donahue.

“My appointment with the surgeon today [Tuesday] will determine what I can or can’t do,” Donahue said. “Two big races are coming up — The Milk Bowl [at Thunder Road] and The Fall Brawl [at Riverside Speedway]. I don’t want to miss them.”