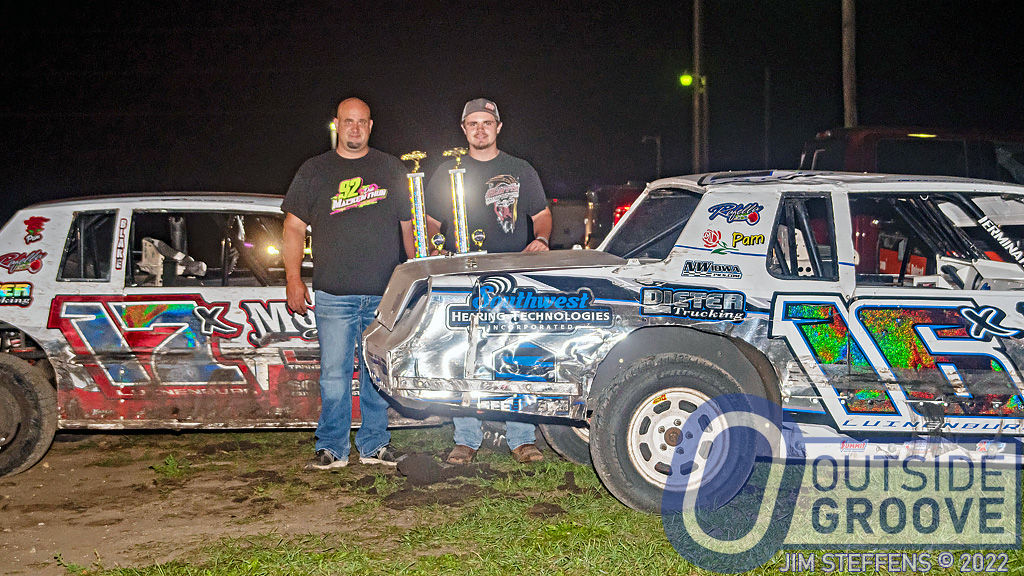 Minnesota’s Worthington Speedway had two Luinenburgs visit victory lane in one night. Last Saturday, father Justin won the IMCA stock car feature. His 18-year-old son Blake scored the victory in the IMCA hobby stocks. Blake recognizes that he’s got a lot of winning to do in order to catch up with his father.

“My first goal this year is to get one more win than my dad,” Blake said. “My second goal was to win on the same night that he does. It’s just for bragging rights. He’s had 16 to 30 wins in a season. I got four this year so far, and he’s got three. There’s a long way to go.”

The Luinenburgs hail from Reading, Minnesota. They work together on the family farm and at their custom manure spreading and trucking businesses.

Justin ranks seventh all-time in IMCA hobby stock wins, with 123. He won the IMCA national championship in 2015, state championships in 2013 and 2016, and 14 track titles. That makes for some big shoes to fill for Blake.

“To accomplish what my dad has will take time,” said Blake. “I’m setting goals for myself and accomplishing those goals. I know I have a long way to go to catch up to him, but I am confident I can.”

This past Saturday, Justin achieved another feat that he’s proud of.

“We’ve always talked about winning on the same night,” Justin said. “We didn’t give it too much thought until it happened. I was really excited. Our racing is a whole family deal — my wife, Tracie, and my daughter, Annalee, were all there.”

The Luinenburgs haven’t been able to both run well on the same night, until last Saturday. However, wins seem to create more wins.

“Usually, either I’m good or he’s good on any given race night,” said Blake. “His winning first inspired me. He ran a smooth race. I knew I didn’t want to screw up. If I could win, it would be a good night. We finally got that double win, and I’m still ahead of him 4-3 in feature wins this season.”