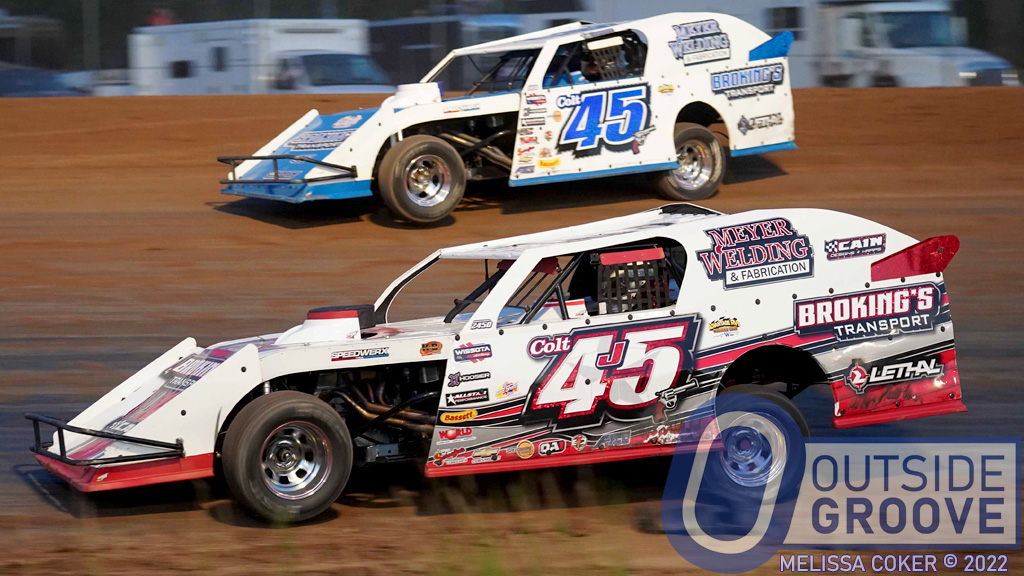 The Brokings steer a pair of 45s in WISSOTA modified competition. Bob Broking (outside), 50, and his son, Johnny Broking (inside), 27, regularly compete together, such as last Saturday at Hibbing Raceway. They’ve done so for the past 11 years.

“When I was a kid, my dad was the guy to beat,” Johnny, of Grand Rapids, Minnesota, said. “Now, I’m teaching him a few things about the technology I’ve learned. Things in the modifieds are quite different from 1997 to today. The cars are still called a modified — that’s all that hasn’t changed.”

“He’s definitely improved over time,” said Bob lightheartedly. “He’s really running well now. People ask me, ‘Why do you let him win?’ I respond that the fact is I never let him win. We’re fierce competitors on the track. He doesn’t cut me any slack. I don’t cut him any slack. They usually then ask, ‘So, you don’t like each other?’ I have to explain that that’s not true, either.”

The Brookings love to compete with each other.

“Oh, yeah, my dad and I have had incidents on the track, but that’s racing,” Johnny said. “If we crash into each other on the track, we know it’s not intentional. It’s not as emotional as it gets in the shop. [In the shop,] we have our own ideas and we insist the other’s ideas will not work. We often have to agree to disagree in the shop.”

Bob sees the in-shop debates as a positive thing.

“We bounce ideas off of each other,” Bob said. “Sometimes they work, sometimes they don’t. The beauty of our situation is that we have two identical cars, and we’re racing on the same track at the same time. We can try our different ideas on our setups and compare notes later.”

Johnny’s nearing the 100-win mark for his career, with only 11 victories away from that milestone. Nevertheless, as his success has grown, he still admires his first racing role model.

“Some racers don’t get to race with their dad for as long as I have,” said Johnny. “I am enjoying every minute of it. Hopefully, he has many more great racing years left in him.”