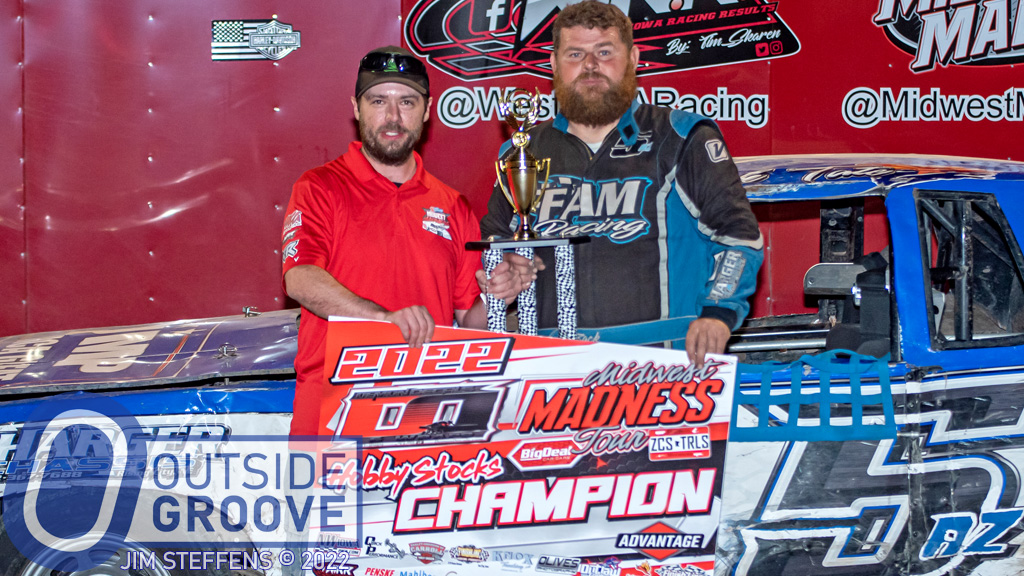 IMCA hobby stock driver Zack Tate put his hometown of Coolidge, Arizona, on the map. He did so by earning the Midwest Madness Tour title.

A suburb of Phoenix, Coolidge is best known for producing musicians such as Duane Eddy, Waylon Jennings, and Sammi Smith. However, Tate rocks to a different tune — the one of the V8 under the hood of his hobby stock. The 39-year-old earns a living as a liquid waste foreman for the City of Coolidge. Tate proudly represents Coolidge as a racer, even if that means driving 1,500 miles to Worthington Speedway in Minnesota, the first venue for five consecutive nights of racing.

“We drove straight through the first night, it took us 24 hours to get to Minnesota,” said Tate. “It was me; my wife, April; and my 11-year-old daughter, Makenzy. It was me and my wife taking turns driving.”

“It was my first time racing at every track,” Tate said. “It was very hard, very humbling. One of those tracks, Buena Vista Raceway, was the first time I ever ran a half-mile. That’s the fastest I’ve ever gone in my life.”

To win the tour title, he had to beat some of the top IMCA hobby stock drivers not only in the Midwest, but the entire country.

“My best finish was third [at Stuart International Speedway],” said Tate. “We actually led with four to five to go. I jumped the cushion just a little bit and caught the wall with my back bumper. I got passed by [Brandon] Cox and [Eric] Stanton. My heart was hurting, because I fell back to third, but these guys are champions.”

Zack Tate finished his week with some more racing at a pair of Iowa tracks — Marshalltown Speedway and Boone Speedway — before picking up a new car from Charger Chassis. When he went home, the city of Coolidge proudly bragged about their hometown hero.

“The City finance director sent an email to everyone in the City [government] that said, ‘Hey, you guys check this out, make sure you tell him congratulations,’” Tate said. “Everybody at my City employment job was super ecstatic about it. It was a blessing when I got home.”